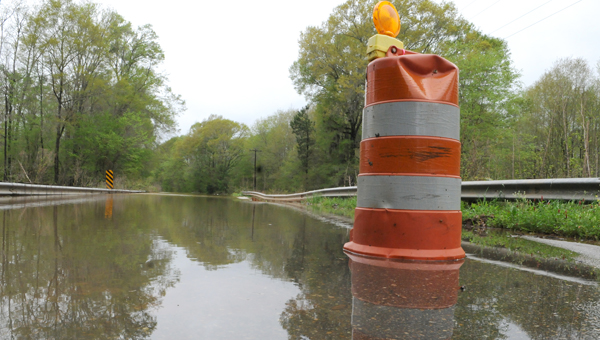 Rainy days: Water flows over a bridge on Dallas County Road 4 near Minter during an early April storm. The road is one of dozens that have been affected by heavy April rainfall. (Josh Bergeron | Times-Journal)

April showers are causing road problems across Dallas County and an increase in expenses for local government.

Selma’s rainfall totals since April 1 are almost double it’s April average, according to the National Weather Service. As a result, rain is piling up on the county’s dirt and gravel roads, making many impassible. The frequent rain is also preventing county crews from making repairs, commissioner Larry Nickels said.

“Some of the roads are completely washing out,” Nickels said. “If there were a break between the rain and the roads dried out, we would be able to go out and fix it. With the rain as often as it has been, it’s difficult for us to do anything about it.”

“It’s a good thing we have a rainy day fund,” Ballard said. “[The extra overtime] doesn’t put us in a precarious position, but it will take money from other places that we had mentally earmarked for something else.”

On April 15, the county received $300,000 in oil lease funds. Each year, the money is doled out to municipalities, and all 67 Alabama counties, from the Alabama Trust Fund — created in 1985 to receive royalties from gas wells along the Alabama coast.

Ballard said the commission previously planned to use the money for small projects in each commissioner’s district. About $150,000 of the oil lease funds will be transferred to the county engineer’s office to help pay for road repairs, Ballard said.

“It’s probably been the worst year that I have ever seen [for rainfall],” Ballard said. “I’m glad we are getting plenty of rain, but it is coming at an inopportune pace. Weather is a tremendous force. It’s unbelievable how much power running water has.”

One solution could be to pave every road in Dallas County, though it would come at a tremendous cost, according to Ballard.

“In a single budget year, it would be impossible to even think about it,” he said. “We are still working to improve the roads with the $10 million we received in [Alabama Transportation Rehabilitation and Improvement Program] funding.”

ATRIP plans to resurface 10 roads outside of Selma’s city limits and three roads in the city.

Paving all roads still may not solve problems permanently, according to Nickels. He said drainage could become a problem in times of heavy rain.

“When we get really heavy rain, we will see flooding in some of our neighborhoods, but we haven’t seen any of that,” Smith said.

Brenda Purifoy wipes down a table at the Sandbar restaurant Friday afternoon. The restaurant is scheduled to reopen for business... read more