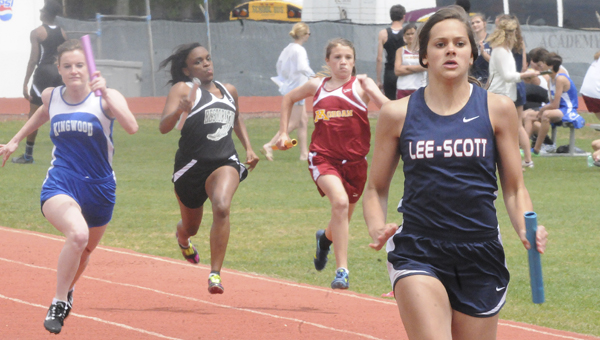 Lee-Scott’s Allison Dennis right, takes a big lead in the girls 4×200 relay Thursday at Memorial Stadium as part of the AISA state track and field championships. Lee-Scott won both the women’s and men’s track championships Thursday in dominant fashion.–Daniel Evans

Athletes at the 2014 Alabama Independent Schools Association’s state track meet at Memorial Stadium spent most of Thursday trying to chase down competitors from Lee-Scott, who ran away with both the men and women’s championships.

The Warriors won their fifth women’s championship in six years and their third boys title in four years in dominating fashion. Lee-Scott won the women’s standings with a total of 149 points, which put the Warriors well ahead of state runner-up Wilcox Academy’s 78 points. The Lee-Scott men finished with 134 total points, which almost doubled up second place Escambia Academy’s total of 72 points.

“We thought it would be a lot closer than this,” Lee-Scott head coach Chad Prewett said. “We had some individuals that really stepped up and it made a huge difference for us in boys and girls.”

The Warriors separated themselves in the field events, which were the first events Thursday and then pulled away in the distance runs, Prewitt said. Lee Scott’s Brackin Stewart set a new AISA record with a time of 10:05.92 in the boys’ 3200-meter run, a blistering pace that kind of summed up the whole day.

“We scored a lot of points in those distance races,” Prewett said. “In the boys’ discus, I think we went first and second. All of the field events I think were crucial for us to build that lead.”

“We got people into most all of the events that I thought we would get qualified for and most of those did as well or better than I expected,” Robinson said. “We had some outstanding performances.”

Among the outstanding performances was Kendall Veach’s first place showing in the shot put — the Senators lone first place finish in any event.

Although the boys didn’t fare as well in the overall standings, Robinson said there were numerous bright spots.

“I was really pleased with Wyatt Sims and the effort he put forth this year,” Robinson said. “He had never run hurdles in his life and he came in sixth in the [300-meter hurdles].

Other boys who had good showings for the Senators’ included

“A lot goes into putting this on and the city recreation department along with Morgan Academy is a great host,” Beck said. “It went great. Most of these guys have done this for years and it has just been a great two days here.”