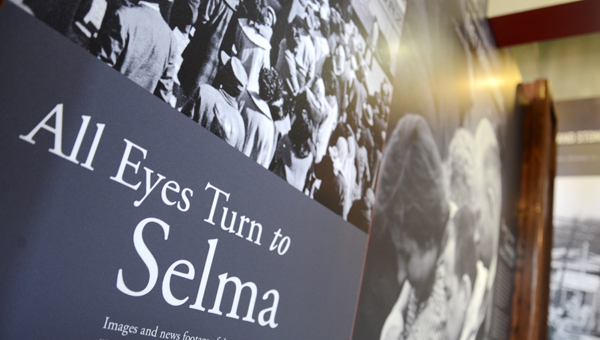 A set of new permanent displays has been erected at the Selma Interpretive Center. The displays provide guests with a comprehensive understanding of Selma’s role in the civil rights movement of the 1960’s. (Jay Sowers | Times-Journal)

“We’ve been working very hard on this, and it has been a long time coming,” Hall said Thursday of the displays that tell the story of the civil rights movement and marches that spread from Selma in the 1960s. “It’s a pretty big deal, and I hope it’s the start of something wonderful to come. The exhibits will help visitors connect better with the stories and it will help us at the Park Service connect better with the visitors.”

The exhibits features large black and white reprints of historic civil rights photos, artifacts from the marches and interactive computers that allow visitors to hear first-person testimonials from people who had taken part in the marches.

Hall said the historic photos were printed on a large scale to make them more even more impressive to the viewer.

“There was a thought process behind the size and arrangement of the photos,” Hall said. “You can come in and learn about the stories of the photos, but there is more to it than that. These photos have been printed this size so the people shown in them are life size, and so the viewer can almost walk into the photos and back in time.”

Barbara Tagger, site supervisor for the Selma to Montgomery National Historic Trail, said the purpose of the Selma exhibit is to give those visitors a more complete story of Selma’s place in civil rights history.

“We now have an opportunity to orient people with Selma’s role in the civil rights movement,” Tagger said. “But to also send them out to where these events took place between Selma and Montgomery with a better understanding of what actually happened back then.”

Tagger, who was among the group that worked to establish the Selma to Montgomery National Historic Trail in 1996, said the new display was better than even she had hoped.

“It really exceeded my expectations,” Tagger said. “We put so much time and effort into this exhibit to ensure its accuracy and to be sure it was creative and interactive, and I am sure visitors who will visit Selma will be very pleased with the presentation.

The Selma Interpretive Center is open from 9 a.m. to 4:30 p.m. Monday through Saturday.