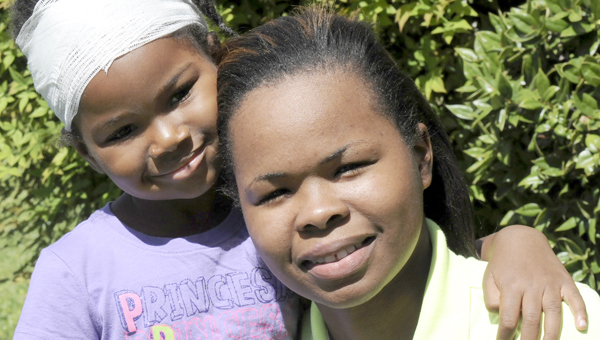 Selma residents Ja’Terrika Thomas, 4, left, and Caroline Thomas, her mother, right, pose for the camera Wednesday outside of their home on 2100 block of Lauderdale Street. Ja’Terrika was allegedly attacked by the neighbor’s pit bull Friday. (Sarah Robinson | Times-Journal)

A reported dog attack left a 4-year-old girl with lacerations on her face and head.

A playful time between four-year-old Ja’Terrika Thomas and a neighbor’s pit bull quickly became a nightmare when the dog reportedly attacked the child, biting the back of her head and face.

Ja’Terrika‘s mother Caroline Thomas, who was at work at the time of the incident, said she was relieved to learn the dog had not killed her daughter.

“I thought she was gone,” Caroline said. “When I saw blood everywhere, I thought, ‘Oh my gosh.’ I was just shaken up.”

Caroline said the incident happened shortly after she left home Friday for work, around 5 p.m.

Caroline said after she arrived at work, a friend took her back home with little detail about why. When Caroline arrived at her house on the 2100 block of Lauderdale Street, she saw Selma Police, who responded to the call around 4:45 p.m., and ambulances in her yard.

“I jumped out the car and went to the home and saw blood everywhere,” Caroline said. “My sister was in there crying, and I asked my sister what was going on. She told me the dog had bit the back of my baby’s head, so I started screaming.”

Her sisters Dasheena and Latasha Thomas were babysitting Ja’Terrika when the dog’s playful demeanor toward the child turned aggressive as the dog pounced on the child. Caroline said Dasheena attempted to pull the child back in the house, but the dog’s mouth was still tight around the child’s head.

It wasn’t until Dasheena beat the dog with a chair that the dog began to bark and let go of Ja’Terrika’s head.

Caroline’s friend Kimberly Thomas was also at the home at the time of the incident said she was napping when the attack initially occurred. When she arrived at the front door, she was shocked to see Dasheena beating the dog off and blood on the walls and carpet.

“I’m thinking the children were outside doing something they weren’t supposed to do, so I got up, not thinking I was going to see a dog,” Kimberly said.

The ambulance transported Ja’Terrika to the Vaughan Hospital Emergency Room where she was treated and received 12 staples in the back of her head for the cuts.

Caroline said Ja’Terrika is now at home and said the four-year-old tends to experience pain at night, but hasn’t shown any signs of the incident causing severe emotional damage.

Caroline said she and her daughter were not familiar with the dog before the incident.

Selma Animal Control Officer was notified shortly after the incident occurred and they came to the scene and took custody of the dog for confinement and safety reasons.

The property owner and the owner of the dog were charged with the following municipal ordinance as it relates to the leash law: running at large of dogs prohibited, vicious animals and public nuisance animal. Those charged are scheduled to appear in a preliminary hearing Thursday, April 24 at 8:30 a.m. in the Selma Municipal Court.