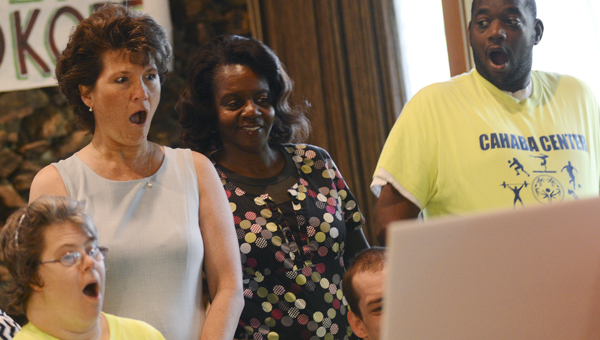 Lafon Barlow held her hands together in nervous anticipation Tuesday morning, waiting to hear how much money the Cahaba Center for Mental Health and Mental Retardation would receive in a donation from the Leadership Selma-Dallas County class XVIII.

As the executive director of the Cahaba Center, barlow had been on hand in March when the Leadership class held their Alabama River Chili Cookoff — which was a success by any measure — she knew the crowd was big, and therefore, so would be the donation.

With big numbers in the neighborhood of $4,000, $5,000 or even $6,000 wishfully bounding through her imagination, Barlow’s mouth dropped open and her eyes could not contain the look of pure disbelief when she finally saw the number Tuesday on a ceremonial check; $10,000.

Her imagination had not run wild enough.

“In my wildest dreams I didn’t think we could have raised that much,” Barlow said. “That’s phenomenal for a community of our size to raise that kind of money.”

The $10,000 donation not only shows the Leadership class has created a quality event in the annual Chili Cookoff, more important, it shows how willing people in Selma are participate in events held to benefit local organizations and charities.

Events like the Chili Cookoff, Art Jam, Rock ‘n Ribs, Chips for Charity and the Low Country Boil are filling up the calendar, and we could not be happier.

Through these events, Selma has shown itself to be a city that cares. Sure, these events are a great time — whether we’re coming together for a bowl of chili, a night of live music or a plate of crawfish — the money we leaving at those events is making this a stronger community.

It is shameful how the quest for votes for this fall is dictating the conversation and shaping government policy in... read more