Banquet kicks off Relay for Life 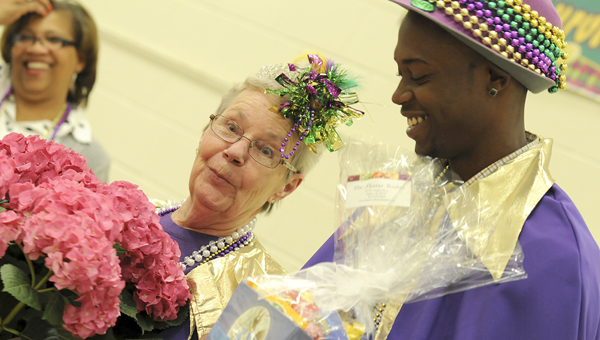 Selma residents Sharon McGuire, middle, and Tracey Palmer Jr., right, were announced the king and queen of the Relay for Life Sherri S. James Survivor’s Banquet Tuesday night. Held annually, the banquet is a one of the kickoff events leading up to Friday’s Relay for Life event, which raises money for the American Cancer Society. (Sarah Robinson | Times-Journal)

“We have beat the bushes and begged and begged, borrowed and begged, and we’re dog-tired,” Miles said. “We come here on this Tuesday night to this Relay event to see the faces of who we were out there beating the bushes for it makes it all worth while.”

Selma residents and cancer survivors Sharon McGuire and Tracey Palmer Jr. were crowned king and queen of the banquet and led a Mardi Gras parade around the inside of the convention Center. Selma resident Ereine Jones, who has been free of breast cancer for more than 53 years, was recognized at the banquet as the individual who has lived the longest after their cancer diagnosis.

“It feels good to be among other survivors, see how well they are doing and meet people you haven’t met before,” Jones said.

“I want just let you all know that the American Cancer Society appreciates your commitment to make this annual event,” Mills said.

Surprise: Cahaba Center for Mental Health executive director Lafon Barlow, along with clients at staff at the center, react to... read more