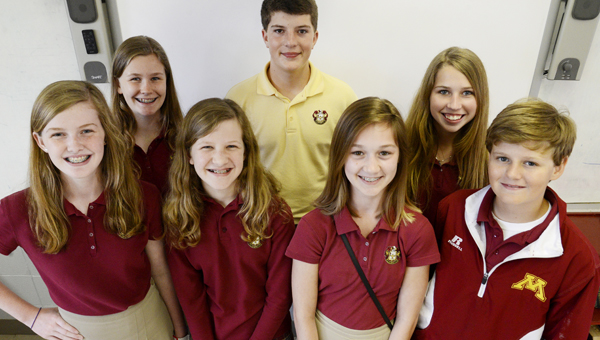 Following a win in the Alabama Independent School Association’s Middle School Scholars Bowl last week, seven students at Morgan Academy are preparing to take their talents to Atlanta in early may for the national competition.

The Morgan Academy Middle School Scholars Bowl team defeated Lee Scott Academy in the final round of the double-elimination state tournament at Huntingdon College in Montgomery, and coach Karim Oaks said it’s been another enjoyable year working with the team.

“It’s fun because you see there little faces light up with what they know,” Oaks said. “And as a coach there are times when I was just asking ‘How did they possibly know that?’”

The team is made up of seventh grade students Kara Wall and Ford Chittom, along with eight graders Colton Roberts, Ann Elizabeth Yocum, Kellee Scheer, Louise Stewart and Maggie Palmer.

Morgan entered the eight-team tournament as the top seed, and Oaks said they did not disappoint in the early rounds.

“Anytime you can score more than 500 points in a round, you know you are doing pretty good,” Oaks said. “And the first round at state, we scored 610 point, so I thought we had a chance.”

After a tough semifinal round victory over Springwood, the Morgan team lost the first round of the finals to Lee Scott, meaning the winner of the second round would be crowned state champions.

“After the first loss to Lee Scott, I told them it was now or never,” Oaks said. “But they were great. They not only knew the answers, but they had the guts to buzz in and give an answer despite the fear they might be wrong. And if they were wrong, they just had to get over it real quick because they are going on to the next question.”

Wall said the pressure of the tournament did not dampen her experience.

“You get nervous, but it’s also fun,” Wall said. “Any competition will make you nervous.”

Chittom said each student brought a different academic strength to the team, something he credits for their success at the state competition.

“I like history and literature,” Chittom said. “Not so much with math. Kellee was really good with math and Maggie was good with the bonus questions.”

After beating Lee Scott in the final round by more than 250 points, Oaks said she and the team have turned their attention to the national competition, which will take place Mothers Day weekend in Atlanta.

“It will be tough to get in practice time before we head to Atlanta because some of the members are involved in other sports here at school, but we will definitely get is some practices,” Oaks said. “This is a big thing for them, and I think it’s a big thing for us to be able to go out and see how we compare to other schools

Chips for Charity a huge hit