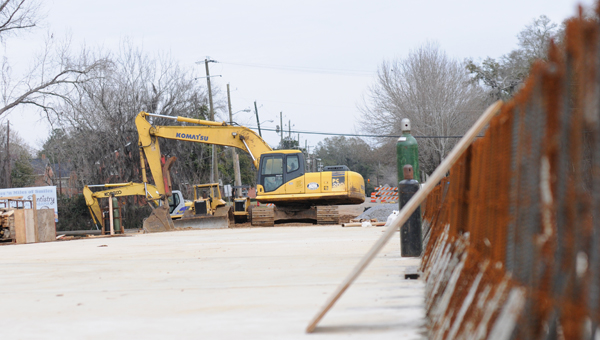 Josh Bergeron | Times-Journal
waiting game: Construction on the Dallas Avenue Bridge is scheduled to finish on May 1, but several events could be affected by a late completion.

Since July, construction of a new bridge over Valley Creek on Dallas Avenue has added time to any afternoon drive across Selma, but as the May 1 scheduled completion nears, there are a number of large events that could add pressure to an already strained traffic pattern.

The construction, which splits Bloch Park and Old Live Oak Cemetery, is part of routine bridge maintenance, according to the Alabama Department of Transportation. With two state track meets and the Battle of Selma re-enactment scheduled just before or just after the completion date, organizers are taking steps to ensure traffic flows smoothly.

The Alabama Independent School Association State Track Meet, scheduled for April 16 and 17, is the first of the three events.

Selma Parks and Recreation Director Elton Reece said traffic for the event will be routed onto U.S. Highway 80 and down Medical Center Parkway and Hooper Drive to keep traffic flowing smoothly. Reece said participants and parents should be familiar with the area, causing less traffic problems than the Alabama High School Athletic Associations 1A to 3A track meet, scheduled for May 2 and 3.

“Most of the participants [scheduled to attend the AISA meet], which will be 30 to 35 schools, have been to Selma already,” Reece said. “Morgan has already hosted two open track meets, but the athletes and family members need to set some time to be there a little bit earlier.”

Regardless of whether crews finish the bridge on time, Battle of Selma organizers expect traffic problems.

“In-town people know the bridge construction is going on, but it will particularly impact out-of-town spectators,” organizer James Hammonds said. “For spectators, our plan is basically just to follow the state’s detour route. It is mainly going to be an inconvenience in the logistics and staff work.”

The reenactment may be the most notable part of the Battle of Selma, but Hammonds said organizers also sent out detour maps to the dozens of schools scheduled to come for School Days, which teaches students about life in 1865.

“Regardless of when they are coming, people need to come 30 minutes to an hour before,” Hammonds said. “That way, you can get situated before the battle starts.”

More than the Battle of Selma or AISA track meet, Reece said the AHSAA 1A to 3A meet poses the biggest threat to traffic, if construction doesn’t finish on time.

Though ALDOT aims for May 1, the original bridge completion date, a concrete pouring error could delay construction.

“From what I understand, the concrete that they put in didn’t hold up,” Evans said during the meeting. “The weather, cold, rain and shifting of the ground did cause something to be done over again. I won’t know until later in the month whether it will be done on time.”

“We are still on track and working diligently to be complete by May 1,” Thompson said.

If construction is even one day late, it could affect the AHSAA meet on May 2, when Reece expects 4,000 to 5,000 people, including athletes, coaches and spectators, to attend.

“All the routes that are coming in take as straight of a line as possible,” Reece said. “A lot of these people will be coming to Selma for the very first time. We want to put our best foot forward. We are planning like the bridge will not be open, but if it is  hallelujah.”

Pastor shares an all too familiar story