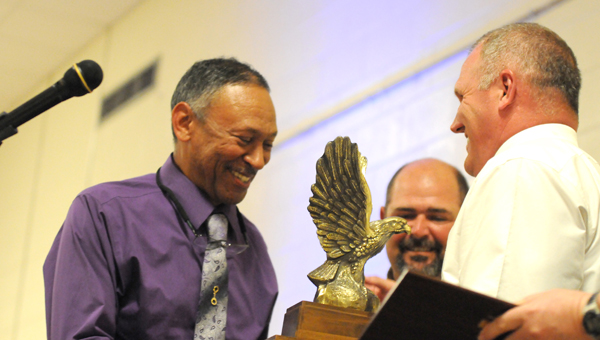 Protecting Dallas County can be a thankless job, but first responders honored one man Saturday for his efforts to protect the safety and quality of life for the Selma-area.

Lorenzo is one of a kind and could not be replaced by 10 good men and is truly an asset to the community, Grimes said.

During the banquet, Robin Walker reflected on the past year and told a story about being trapped near Birmingham in a January snowstorm.

“My husband and Chief [Randy] Pugh kept calling me and asking how I was doing; I said, ‘I’m stuck in a snowstorm how do you think I’m doing,’” Walker joked. “At one point, a group of men got out of their cars and literally started catching cars that were sliding off of the side of the road to keep them from crashing.”

Walker walked around until finding an office building and went inside to take shelter.

She saw a doctor’s office with patients inside that were smiling and laughing. She went inside to wait out the storm. Walker learned that the people inside the office were cancer patients awaiting chemotherapy treatment.

“At that moment, my little problems didn’t even seem to matter,” Walker said. “Ironically enough, they were more worried about me getting home than themselves. They shared their food, water, shelter, pillows, sheets and most of all their life stories with me.”

The banquet honored first responders from nearly every agency in Dallas County, many of which humbly accepted the award with a simple thank you.