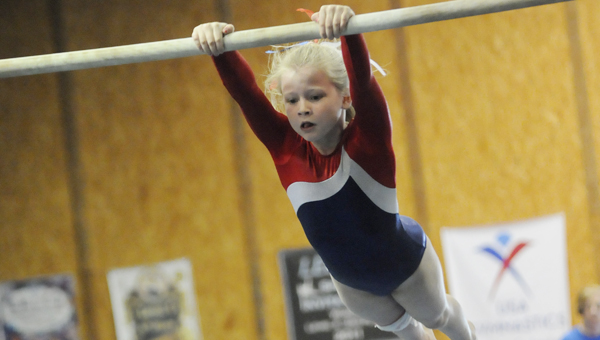 After a long season that included gymnastics meets all over the state, the Dixie Flips wrapped a bow on their season Saturday at their annual Fun Day.

The home meet gave the girls a chance to show off the skills they’ve learned this season in front of friends and family and also served as a fundraiser for the Dixie Flips.

“This is our one big fundraiser every year,” Dixie Flips head coach Tracey Craig said. “The money goes into the gym in an effort to get more equipment. We are trying to build the gym up and make it what it needs to be.”

Several of the performers were veteran team members, with several gymnastics meets already in their rear view mirror. Craig said the verteran girls showed Saturday how much they have improved from the beginning of the season.

“I think they have improved tremendously,” Craig said. “I can see a lot of improvements in the girls and I expect us to take first place next year in a lot of stuff.”

Most of the performers at Saturday’s event were taking part in their first gymnastics meet. Craig said she was thrilled with how they performed.

“It is always surprising and you never know what to expect from everybody,” Craig said. “We have girls in here competing that have only been here two or three weeks and they did tremendous and got through the routines.”

The girls are broken down into levels based on their experience and their level of expertise.

Brooke W. Waters finished first in the level two class all-around standings, winning the bars and beam to finish with a total score of 31.8. Deja Thompkins finished second in the all-around, winning the beam. Anna Drew Haugen was third overall after winning the vault with a score of 8.2.

Madilyn Stevens finished first in the level one all-around standings with a total score of 32.8, followed by Shyana Montoro who had a score of 31.5. Ally Odom finished third with a score of 30.9, followed by Molly Bohannon in fourth, Delaney McHugh in fifth, Brooklyn Bullard in sixth, Ava Young in seventh, Lilly McHugh in eighth, Emily Grace Mims in ninth, Bentley Hall in tenth and Jolie Jackson in eleventh.

Selma quarterback Jesse Boggs looks over the offense in a game last season against Sidney Lanier. Boggs has received an... read more