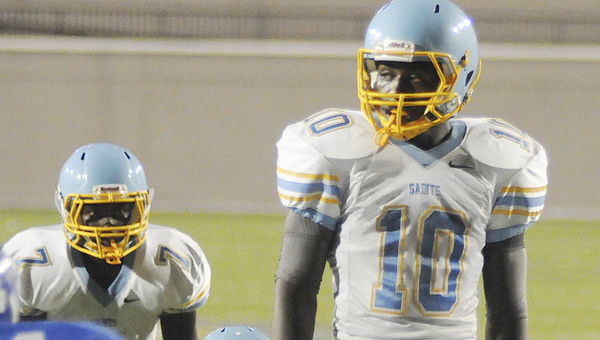 Selma quarterback Jesse Boggs looks over the offense in a game last season against Sidney Lanier. Boggs has received an offer from Middle Tennessee to play college football. –File Photo

Selma head coach Leroy Miles longs for the day that when one of his football players is offered a scholarship to a Division I football program, it’s old hat. The way things are going, he might not be too far from it.

Saints’ quarterback Jesse Boggs received an offer from Middle Tennessee on Friday, becoming the fourth Selma player in the last year to receive a scholarship offer from a Division I college. Boggs, known for throwing touchdown passes for the Saints, will likely be catching them if he joins the Blue Raiders, because Middle Tennessee offered him as a wide receiver.

“Jesse can do a little bit of it all,” Miles said when asked about his quarterback’s prospects at receiver. “When he was a sophomore, he started at safety.”

Miles said Boggs is simply the best quarterback at Selma High School and the team needs him to play quarterback in order for them to be at their best.

Miles is also confident that Boggs can play other positions. If the opportunity presents itself this year and somebody else can play quarterback, Miles said he will get Boggs some time at receiver.

“I would love to have an opportunity to play receiver and let coaches see him block a little bit and allow him to run routes,” Miles said.

Boggs said he would like to get an offer to play quarterback, but that he’s content with any offer. Boggs has gone to quarterback camps each of the last few summers in hopes of earning a scholarship offer as a quarterback.

“I just like being the leader,” Boggs said when asked why he prefers to play quarterback.

In February, Selma linebacker Malcolm Conn  was the first junior Saint during Miles time at the school to receive a Division I football offer. Boggs is the second, following only a few weeks behind Conn, who received an offer from South Alabama. Two Selma seniors signed with Division I universities on National Signing Day.