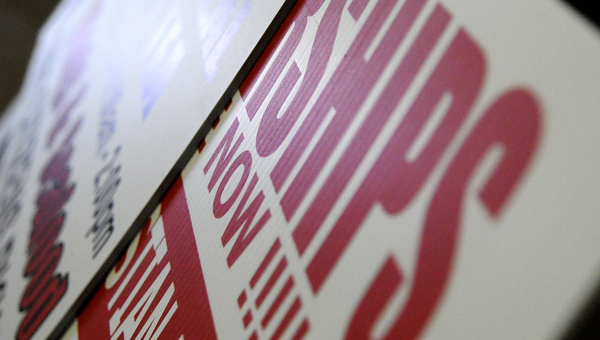 The council instructed Chief of Police William Riley to begin removing any signs, whether selling a product or selling a candidate in the 2014 elections, from city-owned property and public rights-of-way.

“People are being lawless with where they put signs,” Williamson said. “Are we ever going to enforce our ordinance against political signs being on poles?”

Since then, Riley said city employees have collected more than a dozen signs that are attached to light posts, in grassy medians or in front of city-owned buildings. Campaign signs aren’t the only ones being collected. Police officers and city employees are also snatching signs advertising food specials or scholarships up.

“We have just been reminding officers to pick up any signs if they are where they shouldn’t be,” Riley said.

According to the ordinance, collecting signs is the responsibility of the police department, but the city council also asked for code enforcement officers to help as well. Once collected, Riley said signs are kept for candidates or business owners to pick them up.

“Sometimes the people who put out signs for you will put them anywhere,” Evans said. “The candidates may not know where the signs are until they see them. I support the policy that all signs should be on private property and not on city property regardless of who is running, even if I am running.”