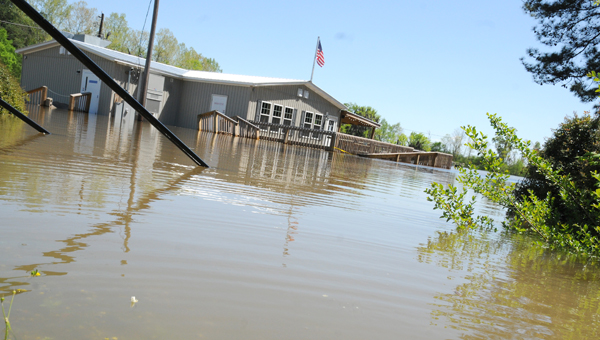 Coming to a crest: Water tops the deck of the Sand Bar restaurant near the Selma Marina Wednesday.

A local seafood restaurant was submerged in the Alabama River Wednesday as a result of heavy rain.

The Sandbar closed Tuesday around lunchtime after restaurant owners learned that floods would be hitting the area.

Sandbar co-owner David Pearce, Jr. said he and co-owner Gordon Mclendon expected floods to affect their business when they opened in 2012, but they were surprised by how often it actually has.

“We didn’t expect it two years in a row, but that’s just part of living on the river,” Sandbar co-owner David Pearce, Jr. said.

“I own a home on the river and this kind of stuff happens, so you just learn to deal with it.”

“Typically on low lying land no homes should be affected at this point,” Abbott said. “At 48 feet, which you know we are hoping we don’t get there, that’s maybe when some of the houses become affected.”

Abbot said Selma people who own homes or businesses along the water lines are familiar with flooding issues and know how to plan ahead.

Pearce said Sandbar employees prepared for Tuesday’s high flood levels by removing equipment and furnishing inside of the building and storing it in a safe place.

“We wanted to go ahead and take care of the building to do the best we could to protect our investment,” Pearce said.

When the incident occurred last year, the owners hired a sanitizing crew to repair the damages, and the Sandbar was opened about three days after the cleaning process. Pearce did not disclose past repair costs, but he said the damages during this year’s incident were minimal.

Pearce said having floods force The Sandbar to close temporarily stops the restuarants steady flow of customers, but he is confident customers will flock to the restaurant once it opens again.

“I don’t foresee any problems,” Pearce said. “As soon as the water gets out everything is fine, and we’ll be open for business as soon as possible.”