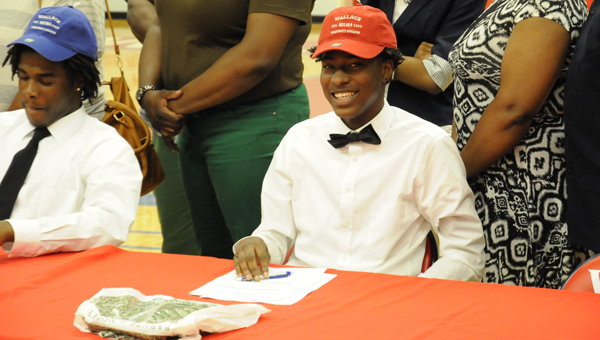 Foster Davis, WCCS men’s basketball coach, said he hopes Simmons and the rest of his recruiting class can help build on a roster that returns several key post players.

“I think I’ve got some boys, especially at the guard position, that are going to be mentally tough,” Davis said. “I tried to bring in some tougher boys that are not afraid to play ball. I think I also brought in some more scorers.”

“It feels good to get the process over with,” Davis said. “It’s a long process because you don’t know if they are going to show up or not.”

Luckily for Davis, all of the players he expected to sign did show up. One of those players, Simmons, couldn’t wait to get on the court for the Patriots.

The Patriots women’s basketball and volleyball teams also brought in several new athletes. April Harper, head coach of both teams, had two very different tasks in front of her when she recruited for each team.

The women’s basketball team graduated several sophomores and had a lot of holes to fill.

“We should have some strong post play,” Harper said of her new recruiting class.

“We have some girls that led their schools to championships during the tournament for high school, great shooting guards and one or two excellent point guards.”

While the basketball team had holes to fill with so many sophomores graduating, the volleyball team lacked for scholarships and has a lot of experiencing returning after featuring mostly freshman this season.

“We have 95 percent of our volleyball players returning so we don’t have a lot of scholarships available, but we have three strong young ladies signing today,” Harper said.  “We got a defensive specialist, an outside hitter and we got a middle/outside hitter.”

Glenn Hudson makes a jump on his bike while taking practice laps on the motocross track at Yeargan Farms Saturday... read more