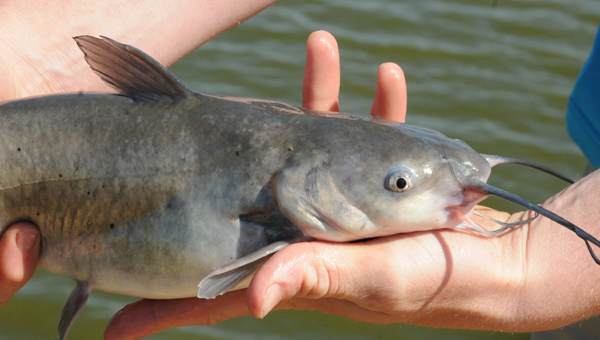 fishy finding: Will Pearce hold a catfish produced on his farm in Dallas County in this 2013 photo. (File Photo | Times Journal)

The U.S. Commerce Department will continue turning to Bangladesh to determine prices on imported Vietnamese catfish.

“Before this surrogacy was established, Vietnam was able to skirt the rules of fair trade and underprice its goods, resulting in enormous harm to the U.S. catfish industry,” Sessions said. “Much more needs to be done to ensure our workers in Alabama can compete on a level playing field, but this is a move in the right direction.”

Sessions was one of seven southern senators to urge the commerce department to choose Bangladesh in a March letter.

The letter expressed concern about the effect of cheaply imported catfish.

Nearly 6,000 jobs in Alabama are directly related to the catfish industry, which generates $158 million for the Alabama economy. Many of the catfish producers are based in the Black Belt.

“It’s just a cheap product coming in,” said Will Pearce, a catfish farmer. “Many of the imported fish contain harmful chemicals that we haven’t been able to use [in America] for 20-plus years. With all the legislation, we are just trying to get a level playing field.”

On average, foreign fish costs one dollar per pound less than domestic catfish, according to Pearce. Some restaurants choose foreign catfish and sell them at the same price as domestically produced fish, Pearce said.

A Selma resident was charged with a class B felony after reportedly starting a house fire over the weekend.  Jessie... read more