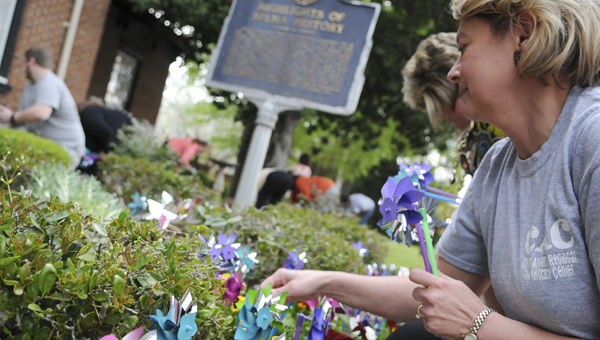 Dozens of people added 305 new additions to the front of city hall on Tuesday.

As a part of Child Abuse Prevention Month, the Central Alabama Regional Child Advocacy Center placed 305 pinwheels in front of city hall. The number of pinwheels was equal to the amount of child abuse cases in Dallas County that were reported to the child advocacy center in 2013, according to the director Lauri Cothran.

“Our main goal is just to bring awareness to the child abuse that goes on and get people to talk about it,” Cothran said. “It’s an uncomfortable subject, one that some people don’t want to talk about it. Some people were raised that way, but it’s important they know that child abuse is wrong and it shouldn’t ever occur, in any situation.”

Selma Mayor George Evans said the pinwheels would remain in front of city hall for the remainder of April.

Cothran said some local businesses have also pledged to place pinwheels in their local business as a part of the advocacy center’s awareness efforts.

Selma native Nancy G. Sewell, who recently joined the advocacy center’s board, said she feels as if more abuse cases have been reported recently.

“At one time, abuse cases were just swept under the run, which is not at all how it should be,” Sewell said. “It burns my heart to see abuse, whether young or old.”