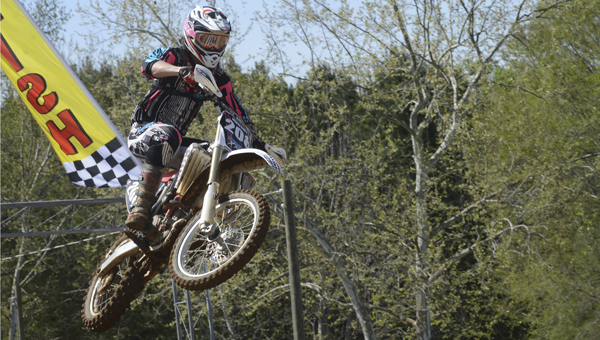 Glenn Hudson makes a jump on his bike while taking practice laps on the motocross track at Yeargan Farms Saturday afternoon. –Jay Sowers

VALLEY GRANDE — Yeargan Farms has a brand new motocross racetrack, lots of eager riders ready to race, and a lot of bad luck.

For the second time in three weeks, the first race at the new motocross track had to be postponed due to rain after storms Sunday soaked the Selma area.

“It is frustrating but it is out of our control,” Angie Yeargan, who is co-owner of Yeargan Farms, said. “It wasn’t meant for us to have a race on those days, so maybe the next one won’t be rained out.”

Unless the next race is scheduled before May, riders will have to wait another month to get their first taste of the track at Yeargan.

“They are excited about it,” Yeargan said of the racers. “They went through this last year and they had six rainouts total in the series, so it’s something that they are used to happening. It happens and they have to reschedule.”

Yeargan feared Saturday that rain may cause Sunday’s races to be cancelled. In order to keep the track in optimal condition, practice started late Saturday and ran until dark instead of getting underway at its scheduled time of 8 a.m.

But, Sunday’s races never had a chance to get started, with thunderstorms Saturday night and Sunday morning dumping two to four inches of rain on the Selma area.

Despite the heavy rain, the track, because of its design and drainage systems, will not take very long to get back into racing condition, Yeargan said.

Yeargan said this week she hopes to discuss potential dates with Noah Bohannan, who runs CAMS.

“We race at four other tracks around the state but we are really ready to get down there and race at Yeargan Farms,” Bohannon said in an earlier interview with the Times-Journal. “They have built a nice track down there and I know our drivers are ready to get there and try it out.”

CAMS runs a 21-race schedule, with four of the races scheduled to take place at Yeargan Farms.

Along with the date in May and the race date to be determined, Yeargan will host race weekends July 5-6, September 27-28 and November 15-16.  CAMS also runs races in West Blocton, Maplesville, Phenix City and Horton this year.

Coaches and players wanting a little extra batting practice may want to get their team together and over to the... read more