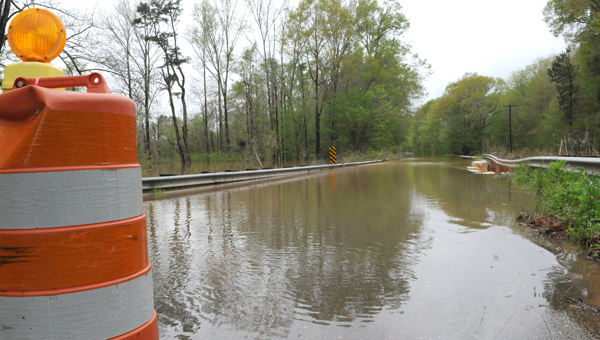 Josh Bergeron | Times-Journal
Water rushes over a bridge on Dallas County Road 4 near Minter. The heavy rainfall from an early Monday storm caused water to pile up on several roads.

The storm was the second rain storm in two days, futher saturating an already wet area, which caused water to build up, according to Dallas County Engineer Coosa Jones.

Soon after daylight the Jones’ office closed a section of Dallas County Road 4 and received calls about high water on several roadways.

“We’ve gotten calls of trees down and roads flooded,” Jones said Monday morning. “There’s been problems with the heavy rainfall pretty much throughout the county. The problems are about the same as we would generally get with this kind of rainfall.”

In total, Dallas County received 3.75 inches of rain in 24 hours, according to the National Weather Service. Dallas County’s average rainfall in April is approximately 4 inches each year.

“In the drying out process, the rivers will continue to rise,” Abbott said. “We’re not expecting it to be a major flooding issue, but it may get near the flood stage.”

Dallas County remains under a flood warning until 7:51 p.m. on Friday.

At about 3 a.m. Monday weather sirens began sounding and the National Weather Service reported a potential tornado in the Selmont area.

Abbott said no tornadoes touched down in Dallas County. The National Weather Service didn’t have any wind speed statistics associated with the early Monday storm in the Selma area.

“All of our shelters were opened,” Abbott said. “We usually open them as soon as a tornado watch is issued, but we knew it was coming and opened them early.”

Alabama Power said less than 100 residents lost power as a result of the storm, mostly concentrated near Marion Junction and the Browns community.