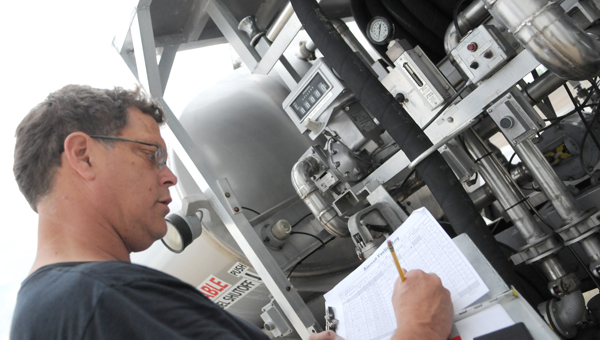 During its Air Force days, Craig Field buzzed with activity. Airplanes took off and landed frequently as Craig served as a training center for young pilots.

Now, renamed Craig Field Airport and Industrial Complex, its not quite as busy, but traffic may be picking back up.

About every two weeks, the base sells 8,000 gallons of gasoline for planes taking off and landing at Craig Field, which still maintains an 8,000-foot runway. Current sales show a marked increase over two years ago, when Craig Field’s Selma Air Center sold the same amount of gas every two months, according to fixed base operations manager Richard Cook.

“More people are coming in and are buying more fuel than normally,” Cook said. “We try to be customer oriented, so the pilots come back. Because of the increase in fuel sales, we have been able to hire additional staff.”

One of the primary reasons behind the increase, Cook says, is a government contract Selma Air Center secured in late 2012, when they were landings were fewer in number. The contract essentially allows pilots to use military fuel cards, according to Cook.

He says most of the increase in traffic comes from Fort Rucker, located between Dothan and Troy, but civilian takeoffs and landings have seen a small uptick as well. Increases in profits aren’t huge, but Craig Field director Menzo Driskell says the increase in traffic will lead to a higher priority on the Federal Aviation Administration’s funding list and, in turn, more improvements.

“The more we pump, the more we get out of it,” Driskell said. “Selling more fuel means more operations, or takeoffs and landings.”

When pilots land, two buildings sit adjacent to the runway for their use — a terminal building, with places to relax, and the fixed base operations building, with a flat-screen TV, dining area and internet access. Cook said Craig Field continues to increase its amenities in an effort to keep luring pilots back.

“Craig Field has invested a huge amount of money into the airport,” he said. “To me, it’s the biggest asset. It’s the front door to Selma.”

To keep up with demand, Cook and the Selma Air Center are planning to obtain a larger fuel truck. It’s current truck holds 3,000 gallons.

“Hyundai suppliers have flown in here and can walks right across to their plant,” Driskell said. “It’s certainly an economic development tool.”

Sutlers returning for Battle of Selma

Sutlers are preparing to make their annual return to the area to take part in the Battle of Selma, when... read more