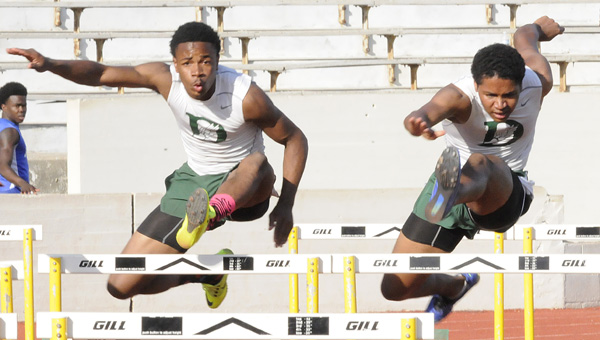 Dallas County’s Quintavis Parker, left, and Xavier Mundell, right, run in the 100-meter hurdles at Thursday’s Selma High School Invitational at Memorial Stadium. Parker won the event with a total time of 15.2 seconds and he also finished second in the 300-meter hurdles.–Daniel Evans

With just a few weeks left before the Alabama High School Athletic Association’s state track meets, teams converged on Memorial Stadium Thursday for the Selma High School Invitational to see where they stand at this point of the season.

The eight team field included Keith, Dallas County and Selma. All three schools won at least one event Thursday in a meet that gave every schools in attendance a better look at the strong and weak points of their programs.

“I thought we started off a little slow and then we got our feet underneath us and started acting like the team we normally are in the middle of the meet,” Dallas County head coach Robert Dolbare said. “I like the way we finished and overall I’m very pleased with how we did today.”

Dolbare said despite his team’s strong showing, he knows there’s still a lot of work to be done befire May’s state meet.

“There are several things that we have to get fixed between now and May and that is what we are looking,” Dolbare said.

While Dallas County shined in the track events, Selma fared well in the field. The Saints swept the girls’ long jump with the top three finishers. Jacquetta Dailey finished first with a jump of 16 feet, followed by Brenna Porter and Tikeysha Shields.

“Porter ran everything we asked her to do,” Selma head coach Ivery Williams said. “She is slightly injured and still ran in the 4 x 400.”

However, with his team running in its home meet, Williams was hoping Selma would have a better overall showing.

“I’m pleased but disappointed because I don’t think they put out the effort I thought they would put out,” Williams said.

“[Simmons] did well last year in the high jump and by his performance this year it looks like he can go even further,” Keith track head coach Clifton Reeves said.

Although the Bears didn’t win a lot of events, Reeves said the meet helped his team grow.

“We got a chance to gauge ourselves against some better class of athletes by coming to these types of track meets,” Reeves said.

Other high schools that participated included Jeff Davis, Demopolis, St. Jude and Isabella, but in the center of all the big boys was Martin Middle School, who particiapted in the school’s first track and field meet during head coach Clayton Cogle’s time with the school.

Cogle said the Bulldogs competed with the high schools Thursday in an effort to strengthen their track program. Martin Middle hopes to send a lot of track athletes to Dallas County in the future, Cogle said.

“Getting beat by these high schoolers is showing us where we need to be in the future,” Cogle said. “I think they did phenomenal. I think they hung in really well and I think they fought.”

The AHSAA state track meets are May 3-4 in Selma and Gulf Shores.

Kyle Reaves, above, of Camden tees off during the 2014 Epsilon Sigma Alpha tournament at Valley Grande Golf Course. Below,... read more