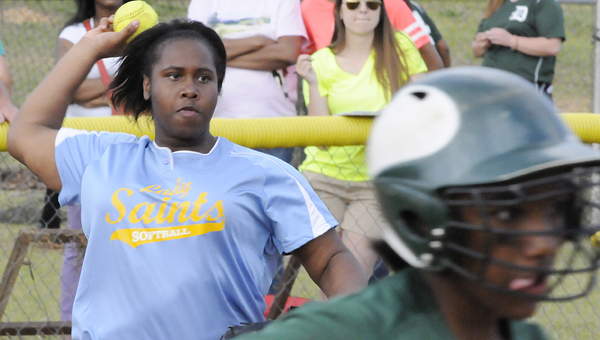 Selma third basemen Shaquira Livingston attempts to throw out a Dallas County baserunner in Tuesday’s game at Dallas County High School., but the throw was a little late and resulted in the runner being safe. The Hornets won 16-2 Tuesday for their second victory over the Saints this season.–Daniel Evans

PLANTERSVILLE — The Dallas County softball team is not producing hits at the rate head coach Willie Moore would like, but the Hornets provided plenty of offense Tuesday in a 16-2 victory over county rival Selma.

Although Selma (2-9) had more success at the plate than in Monday’s 17-0 loss to Jeff Davis, the Saints weren’t able to score enough to keep up with the Hornets (9-8), who produced many of their runs on Selma errors and walks.

However, Moore would like to see his team produce more at the plate, while also being smarter on the base paths.

“I wasn’t happy with our effort. We didn’t have any leadership,” Moore said. “We popped the ball up and didn’t run all the way and ran into outs and stuff like that. Those are the routine mistakes you shouldn’t make at this stage of your high school career.”

Dallas County started Tori Hatfield on the mound and she pitched all four innings for the Hornets to pick up the win.

“I don’t think she walked very many today,” Moore said. “We talk as a staff with our pitchers that we are trying to get to the point where we can play a game where we have no more than three walks in a game and we will have a chance to win.”

“Our biggest problem was our defense let the pitcher down,” Fedor said. “She pitched really well. I’ll give T’Keyah Harris a lot of credit, she did a good job.”

Harriet Shaw came into run for Harris, but left second base early and was called out for the final out of the inning to end any Saints’ momentum.

In the bottom of the second inning, Amy Persinger singled and scored on the same play after two poor throws by the Saints.

With her team up 8-1 after three innings, Hatfield shut the Saints down in the third.

Hatfield forced Jashaun Davis and Shaquira Livingston to fly out to stop Selma from inching any closer.

In the bottom of the third, Ariel Atkinson singled deep to center field to score Brittney Brown to give Dallas County a 9-1 lead.

Jala Hayes singled later in the inning and scored on a wild pitch to give Dallas County an 11-2 lead. After three more runs scored on passed balls, Amy Persinger doubled with nobody on base and later scored on a single by Yasmeen Green.

With Dallas County ahead 16-2, the Saints were unable to get anything going offensively in the top of the fourth inning.

The game was called after four and a half innings due to the ten-run rule.

Dallas County was playing its first home game of the year Tuesday.

The Hornets will play the majority of their remaining schedule at home, but Dallas County’s next game will be at Southside at 4 p.m.