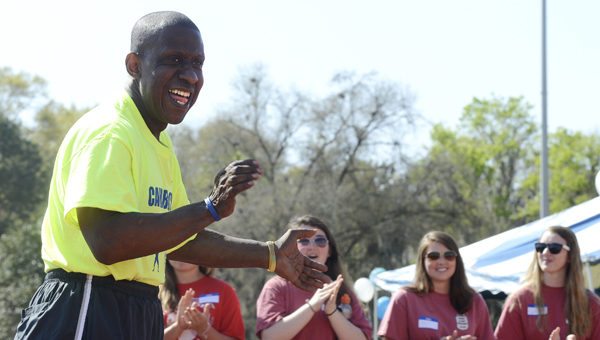 By Jay Sowers and Sarah Robinson

Floyd Sanders, day programs coordinator at the Cahaba Center for Mental Health, said Tuesday’s Special Olympics were something the staff and participants at the center were anxiously awaiting.

“They look forward to this all through the year,” Sander said. “This is the highlight of their year right here, and it’s the culmination of all their training. It’s a very special to be able to see them participate in a day like this a compete like any body else would.”

“I mean this has just been a terrific day,” Barlow said. “It’s just been so great to see all the smiles and hear all the laughter before, during and after each event.”

At the start of the day’s festivities, the athletes made their grand entry marching around the stadium’s track behind the Southside High School Junior ROTC and marching band.

Special presentations followed the torch’s entry, with donations being given to the Cahaba Center from the Knights of Columbus and Woodsmen of the World.

Knights of Columbus member Paul Robitaille said his group was honored to see their $3,600 donation going to an organization that is so important to the Selma community.

“It feels great to be a part of this day and to see all these great people out here having so much fun,” Robitaille said. “And this is a special day not only for the athletes, but for everybody is here.”

Pitts was one of the athletes who participated in a variety of events Tuesday, taking part in the softball throw, shot put and 100 meter walking events.

It may have been a busy day at the stadium for Pitts, taking first place in each event, but there was no where else she would rather have been.

“Oh, love it. I like playing the games and watching everybody else do their thing,” Pitts said. “I love today, and I have to thank God for today.”

Norfleet said she has high hopes for the trip to New Jersey in June.

“I will be trying to bring a lot of gold home,” Norfleet said. “But, it’s a lot fun getting to travel and meet people and being friends with them.”

Members of the Selma Fire Department head on to the roof of the Selma One Hour Cleaners laundry location Monday... read more