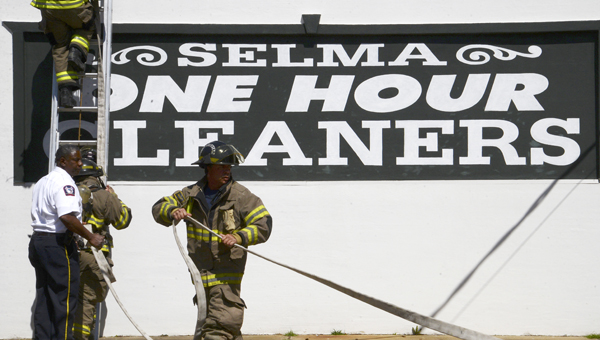 Members of the Selma Fire Department head on to the roof of the Selma One Hour Cleaners laundry location Monday morning after a fire started in a dryer vent at the business. (Jay Sowers | Times-Journal)

A smoldering fire in a dryer vent filled with highly combustible lint can spell disaster for laundry companies, but one local business escaped nearly unscathed after just such a fire broke out Monday morning.

Witnesses, who had been inside the Selma One Hour Cleaners dry cleaners on Water Avenue, reported hearing a loud pop before seeing smoke and flames shooting from behind one of the business’ dryers.

Members of the Selma Fire Department arrived on the scene moments later. Fire Chief Mike Stokes said the blaze wasn’t nearly as bad as it could have been.

“There had been a bunch of lint built up in one of the dryer vents, it caught fire, and luckily the fire was contained to the pipe itself,” Stokes said. “The only thing we had to do was get on the roof and put water down that vent to make sure it was out.”

Stokes said even though the fire started in the vent, the metal vent had performed perfectly by not allowing the flames to spread.

“That’s part of the reason for fire codes,” Stokes said. “Everything has to be in pipe and contained in order for the whole building to not catch on fire. If something like this goes unnoticed for hours and hours, then the pipe might not be able to contain it. But the fact people were here and they were able to take care of it really quick.”

Stokes said damage was limited to the dryer, as well as the clothes in the dryer at the time.

Stokes said no damage was caused by the water his department sprayed down the vent from the roof because of a well-placed floor drain.

“It’s hard to believe, but there was a floor drain right underneath that particular dryer,” Stokes said. “I bet we only sprayed about four gallons of water today, but it was able to drain straight out through that floor drain.”

Employees stated the business reopened within an hour. It was business as usual until closing time at 5 p.m. Monday.

Students attending a recent Battle of Selma School Days took a break from their lessons to enjoy some fresh root... read more