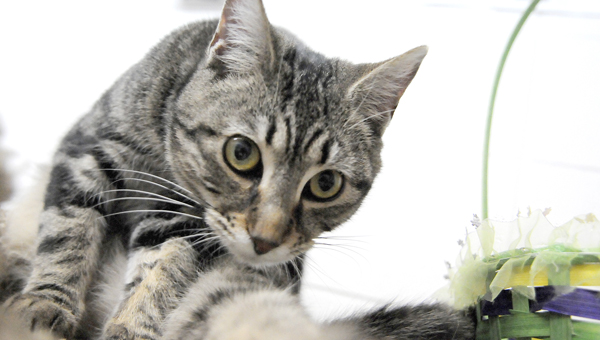 Selma Animal Shelter resident Stormy plays in the cat room on Monday. A group of volunteers are going to help renovate the cat room to allow cats to roam freely inside the room. (Josh Bergeron | Times-Journal)

Cats at the Selma Animal Shelter are just a few days away from a new, more spacious residence.

Selma resident Shannon Lynch is leading a group that plans to renovate a cat-adoption room at the shelter during, what she is calling, Catapalooza. The renovations will begin removing cages from the cat’s room and allow the felines to roam freely, according to Lynch.

The room is located several feet from the shelter’s front doors. Currently, cats are only allowed to roam inside of the room during certain times of the day, but with their new digs, the cats will be permanently removed from the cages. With the help of a local Boy Scout troop, volunteers and a contractor, Lynch plans to build a ledge under the room’s front window, stairs leading up to the ledge and various areas for the cats to relax. Lynch said she plans to complete the entire renovation on Saturday. She said the total cost of the changes should cost less than $1,000.

Councilwoman Susan Keith, whose ward includes the shelter, said she would help pay for expenses associated with the renovations from her council funds.

“Shannon has just harnessed the collective energy of volunteerism, civic mindedness and old fashioned collaboration, working together,” Keith said. “Everybody is giving a little bit to see things improve.”

“Some cats might just lay around on the couch and others might move around and play,” Curtin said.

“We have adopted more cats since Shannon has gotten on board than we have adopted in the two years that I’ve been here,” Curtin said. We are almost to the point where we are out of cats.”