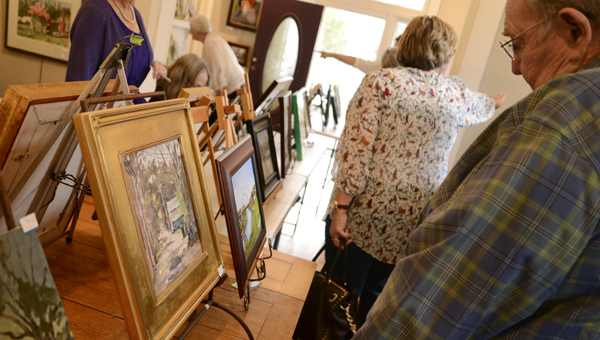 The results of the annual Selma Pilgrimage Plein Air Wet Paint Sale are in, and event organizers are stunned by this year’s success.

“In the past three years, we have sold about $3,500 dollars worth of art during the Wet Paint Sale,” Selma Art Guild member Karen Weir said. “This year we raised $6,190.”

Of the $6,190 raised during the March 15 sale, 20 percent will be divided evenly between the Selma Art Guild and the Selma-Dallas County Historic Preservation Society.

The plein air artists had set up their easels and canvases throughout Selma to create the works sold during the wet paint sale.

Weir said the event, which was scheduled to last an hour-and-a-half, only lasted one hour after nearly all of the pieces had been purchased.

“The artists were just thrilled with the results and we’ve already heard they are all ready to come back again next year,” Weir said. “We are just amazed and thrilled.”

Weir said the majority of the pieces were sold to residents of Selma, who wanted to take home works of art that featured the buildings and landscapes of their hometown.

“Most of the people who come to the sale and buy the pieces art are not from out of town,” Weir said.  “They are people who live locally and want to own paintings of the places they see every day. And that is what is so distinctive about it, is these are things they recognize.”

In light of this year’s success, Weir said she is unsure if more than 25 artists would be invited in future years, as had once been the practice.

“That’s always a question, if we should open it to more people,” Weir said. “In the past we have had 28 people, and we had found it was a little tight during the art show at the Art Guild’s studio.”

Weir said one reason this year’s event was a such a success could be attributed to the fact the painters were not restricted to painting only pictures of buildings on the Historic Selma Pilgrimage tour.

“We are also going to have a sign-up list out at the Selma Art Guild’s gallery throughout the year so people can write down all the places they would want the artists to paint,” Weir said. “So, if somebody wants their house or their street painted, they can go ahead and sign up.”