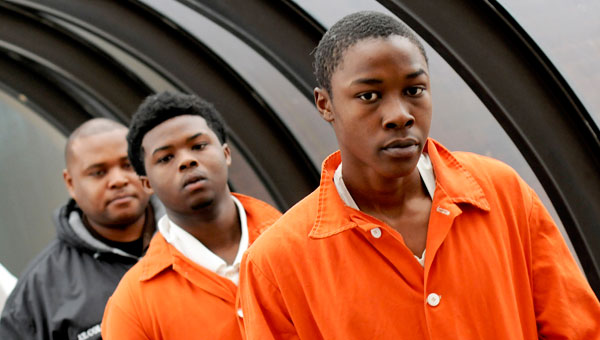 John Jones (left) and Larry Hunter (right) are escorted into circuit court in December for an initial hearing in the murder of Alexis Hunter. (File Photo | Times-Journal)

Two teens charged with the killing of a Selma High student still await their fate.

John Jones, 16, 1217 Fifth Ave., and Larry Hunter, 18, 1905 Marie Foster St., are scheduled to appear before the Dallas County grand jury within the next couple of months. Jones and Hunter were charged with capital murder in late December for allegedly playing a role in the murder of 18-year-old Selma High student Alexis Hunter.

During the December bond hearing, it was reported that a group of young men, including Jones and Larry, approached three girls on a Saturday night, including Alexis, and Alexis was shot after an exchange of words amongst the group.

Witness accounts vary on the exact details of the conversation, but Selma Police Department Sgt. Kendall Thomas said multiple interviews with witnesses led him to believe Jones was the shooter.

Thomas described the scene he witnessed upon arriving at the corner of Franklin Street and Memorial Avenue around 10 p.m. Thomas said Alexis was lying on the curb with her legs on Franklin Avenue and her torso on the grass.

The two remaining girls returned home after the gunshot, but suspects chased them and asked for their phones.

The details of the night, which have been discussed at multiple hearings, often evoke emotion from family members of the victims who attend the hearings, Alexis’ aunt Patricia Bailey said.

“It’s rough and tough,” Bailey said. “You can hear a lot of sniffling. There are a lot of wet eyes up there.”