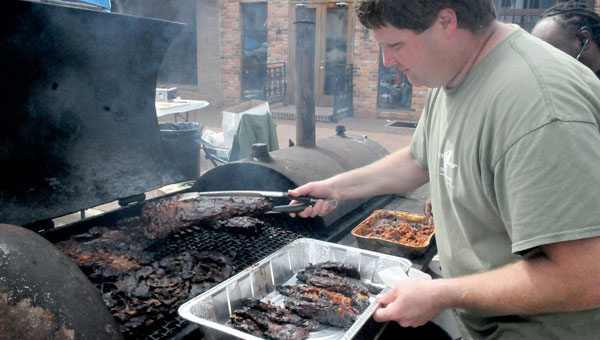 The annual Rock ‘n Ribs Benefit is less than a month away and members of the event’s planning organization, the Black Benefit Group, have said they are looking to build on the successes of past events.

BBG member Carl Bowline said the event is just another chance for the group to host a one-of-a-kind fundraiser to bring the entire Selma community together.

“The normal ways of fundraising through silent auctions and things like that have kind of gone by the wayside, because everybody is doing that,” Bowline said. “So for us, it’s all about finding new ways to bring people out to contribute to the community.”

The 2014 Rock ‘n Ribs event is schedule to take place on Selma Water Avenue beginning at 1 p.m. on Saturday, April 26. The event will feature a judged rib cook-off, a play area for children featuring a climbing wall, as well as live music throughout the day and evening.

Tickets for the event are $10 to enjoy all-you-can-eat ribs and hor d’oeuvres and $20 to enjoy both the ribs and live concerts. Teams of four can participate in the rib cook-off for $100.

Bowline said the group’s Art Jam concert and art show in December, which featured singer-songwriters Jason Isbell and Amanda Shires, was a prime example of the group not only reaching it’s fundraising goal for an event, but also providing those in attendance with an opportunity to enjoy the best food and live music in Selma.

“With the Isbell show, we brought in people from all over Selma, all over Alabama, and even some from other states,” Bowline said. “Our big thing is to bring in people — especially young people — and show them the great things our city has to offer.”

While the majority of the planning is done and the schedules are set for the event, BBG member Clay Carmichael said he and other members aren’t completely ready for the event just yet.

“The main thing we are trying to do now is fill all of our sponsor spots and team spots and get the word out to people in the community however possible,” Carmichael said.

In years past, proceeds raised during the rib cook-off and concert event have been donated to Habitat for Humanity, S.A.B.R.A Sanctuary and individuals battling cancer.

Carmichael said the fundraising successes of past events have attracted many people to the group and they events they host throughout the year.

“We’ve got it going now,” Carmichael said. “We’ve got people knocking down our door to help us out with this event and some other things we are wanting to do in the future as well.”

Lunch at the Library series features author of novel ‘Wash’