A Selma resident is facing abuse-related charges after reportedly beating his stepchild Wednesday.

Eric Theopolis Banks, 40, 1710 Oliver St., was charged with aggravated child abuse after reportedly picking up, body slamming and punching his 12-year-old stepchild on the left side of the face, striking his ear. This reportedly happened after Banks learned the 12-year-old victim was wrestling with his own sibling in their home. Banks, who has been registered as a sex offender on two separate occasions, is currently being held in Dallas County Jail with a bond of $250,000. 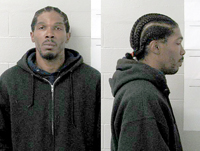 “When the mother came home, she attempted to discipline the youth, but was met with resistance,” Lt. Curtis Muhannad wrote in a press release. “She went and got the step-father, which led to them restraining the child to administer the punishment.”

The child was taken to Vaughan Regional Hospital Emergency Room where the child was diagnosed with a ruptured left eardrum from blunt force trauma to his head, according to the Selma Police Department.

Investigators with the Selma Police Department interviewed both Banks and Smith prior to Bank’s arrest.

The Department of Human Resources was notified about the case, and the victim and his siblings were temporarily removed from the home.

Currently, there are no charges pending against Smith.