Lunch at the Library series features author of novel ‘Wash’ 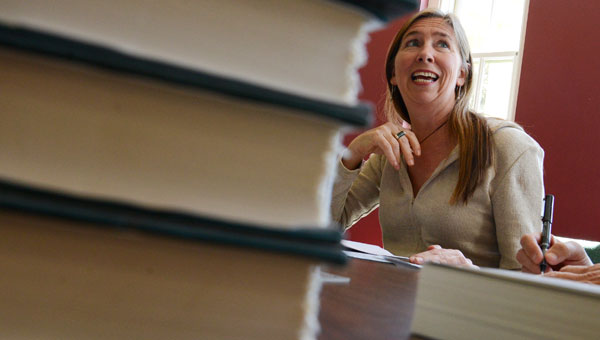 Author Margaret Wrinkle was in Selma Thursday to speak about her new book ‘Wash’ as part of the Selma-Dallas County Public Library’s Lunch at the Library series.

‘Wash’ has garnered Wrinkle critical acclaim for its fresh look at the period of slavery in America, a time Selma-Dallas County Public Library director Becky Nichols said people should learn about, no matter how difficult the details may be.

“It’s an explicit novel and the characters are incredibly built and set against a very difficult time,” Nichols said. “The things discussed in the book are difficult things for southerners to read and understand. The novel can really affect you, regardless of your background, but it’s a part of our history we must look back on.”

Born in Birmingham in 1963, Wrinkle said the topics surrounding nation’s struggles with race relations and societal divisions have been on her conscience as long as she could remember.

“When people ask me where the story came from, I tell them I feel like it’s been headed for me all along,” Wrinkle said. “Being born in Birmingham in July 1963, I came into a pretty racially charged landscape. And like a lot of white children in that era, a lot of my earliest and strongest bonds were with the black people who were being paid to take care of me. I grew up crossing racial boundaries and carrying divided loyalties. And I found that surreal and confusing.”

Jeannie Thompson, of the Alabama Writer’s Forum, introduced Wrinkle to the crowd of roughly 40 guests, and said she had been taken by the author’s detailed construction of each character and the time in which they lived.

With the anniversaries of the civil rights movement of the 1960s in mind, Thompson told the audience Wrinkle’s book was simply a must-read for current generations.

“We commemorate so we can learn how better to go forward,” Thompson said. “Read the book to connect with the characters and with human beings who you may not have ever known. They will teach you something about how you interact with other people today.”

The City of Selma approved a contract with a new architectural firm to lead the completion of the Riverfront Amphitheater... read more