DCHS struggles against No. 3 ranked Childersburg 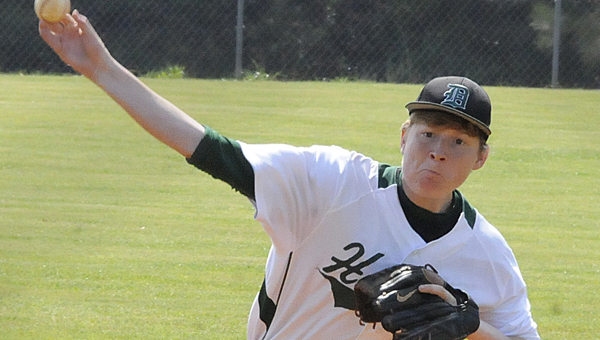 Dallas County starting pitcher David Robertson throws a pitch during Saturday’s second game against Childersburg. Robertson and the Hornets fell to the Tigers 11-1 in game two, which was the final game of a weekend series between the area rivals.–Daniel Evans

PLANTERSVILLE — The No. 3 raked Childersburg Tigers (19-1) put on a hitting clinic Saturday as they capped off a three game series sweep over Dallas County (2-16).

The Tigers totaled 38 hits in two games Saturday, dominating at the plate in 28-5 and 14-4 victories over the Hornets, who have not won an area game this season.

“If we played them 100 times, they’d beat us probably — to be honest — 100 times but we hit the ball a lot better,” Dallas County head coach Cody Massey said. “Our Achilles heel all year has been not getting a hit when we need it. We got the bases loaded a couple times.”

While the Hornets hit the ball better as the weekend progressed, the Tigers seemed to never cool down.

Childersburg took the first game of the series 11-1 Friday and then traveled to Plantersville Saturday for the final two games of the series. The Tigers hit five home runs in Saturday’s first game, including two each by Nick Looney and Reeves Brashear.

“If we can keep swinging it like, it’ll be a good ride,” Childersburg head coach Chad Slaten said. “That’ll be hard to duplicate.”

With several starters sitting the Tigers were unable to clear the outfield fence in game two, but they still scored plenty of runs.

However, early on, the Hornets had their best spurt of the weekend series.

Dallas County took a 4-1 lead in the first inning after Childersburg starting pitcher Trevor Bates got off to a rocky start. Bates walked the first two batters he faced and then gave up a double to Prince Tolbert, which scored James Hale.

The Hornets continued to walk around the bases, as Bates struggled to gain control. William Lofton, Gabe Denson and David Robertson all walked and Donnie Ross reached first base on a bad throw by the Tigers’ shortstop.

“Something we have been preaching is to make a pitcher work is one of the best things you can do,” Massey said. “The higher his pitch count gets, he is going to get tired.”

By the time the damage was over, the Hornets had a 4-1 lead and hope of stealing the final game of the series.

Instead, the Childersburg bats woke up and Bates calmed down.

The Tigers piled up five runs in the second inning, led by a double by Zack Lightsey that tied the game. Justin Baker singled to add another run and Peyton Logan hustled to reach first on an infield single, scoring Lightsey to make the Tigers’ lead 6-4.

Dallas County loaded the bases in the bottom of the second and when Lofton powered a ball deep into left field, it looked like the Hornets might tie the game. But, Tigers center fielder Tylan Coleman robbed him of a base hit and quickly tossed the ball into the infield to stop Bruce Talbot from tagging up to score from third.

Denson grounded out to end the inning, leaving the Hornets’ deficit at four.

Childersburg kept piling up points in the third and fourth innings, adding seven more runs. A final run in the top of the fifth insured the game wouldn’t go all seven innings because of the 10-run rule.

Dallas County’s next game is in a tournament at Isabella High School Thursday, March 27.