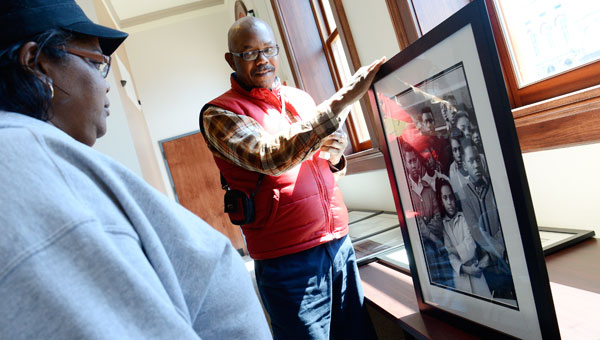 Alvin Peters, center, holds up a historic photograph for his cousin Tamara Thomas to look at Tuesday at the Selma Interpretive Center. The center is hosting a display of historic civil rights photographs daily through April 4. (Jay Sowers | Times-Journal)

Three weeks into a month-long stay in Selma, the “Civil Rights Leaders Then and Now: Photographs by James ‘Spider’ Martin and Johnathan Purvis” exhibit has drawn large crowds to the Selma Interpretive Center.

Park Ranger Theresa Hall said she has been happy to see the increased number of visitors from near and far passing through the center’s Broad Street front door since the show opened on March 3.

“People are telling me they are coming here specifically to see this display,” Hall said. “I think it’s very important for people to see these photos. A lot of people are still alive today that were alive in 1965, and they are able to bring their families in and explain what happened that day, and what they experienced.”

Hall said even though she had seen many of the images before, the size of the prints on display at the center made them more striking to her.

“These images are highly impactful,” Hall said. “I had seen a lot before, but these big prints really hit me hard.”

Evergreen resident Josephine Thompson was at the center Tuesday with family members, and said the images are something people of all ages need to see in person.

“It’s very important especially for the young people who have no idea how life was for those of us, and looking at this can give them a general idea of where they have been,” Thompson said. “Whenever we have friends visiting us, we always end up in Selma. It means a lot to me what these people did back then, because it opened so many doors for me.”

Thompson’s niece, Tamara Thomas, was in town Tuesday and said viewing the display at the center was an emotional experience for her.

For Thompson, the civil rights battle in Selma still serves as a reminder that with hard work, anything is possible.

“When I was younger, I was taught I had one place in society, but I always knew there was another place for me and it wasn’t just washing dishes and being behind someone else,” Thompson said. “Bloody Sunday and the civil rights march was always a bell ringing in my head that I could do anything I wanted to in life.”

The photo exhibit will be on display at the center through April 4. For more information, contact Hall at 872-0509.