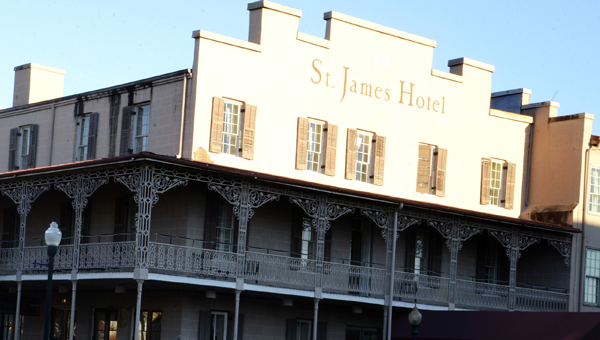 Coming soon: The St. James Hotel, on Water Avenue, could be under new management in the near future as Selma Mayor George Evans is expected to present Strand Management as his recommendation for management of the hotel. (File Photo | Times-Journal)

City officials will soon select a new suitor for the St. James Hotel.

Selma Mayor George Evans is expected to recommend Strand Management to the council as a lessee of the hotel at the council’s next work session — April 3.

The St. James committee, composed of local residents and councilwomen Susan Keith and Angela Benjamin, unanimously approved Strand Thursday in a closed-to-the-public meeting after considering a total of three entities. The Times-Journal learned Monday Evans is expected to follow the committee’s recommendation.

Details of the proposal are currently unclear. Evans could not be reached for comment Monday.

The other two entities were Roberts Hotels, run by St. Louis businessman Michael Roberts, and Tom Bolton, president of Cooper Brothers Construction. Roberts Hotels proposed to lease the hotel, while Bolton aimed to purchase the hotel.

Councilman Cecil Williamson previously advocated for the city to sell the St. James. After hearing the news Monday, Williamson said he hopes the city continues pursuing the hotel’s sale.

“I hope that the company will put in a condition so that we can soon sell it,” he said.

The St. James committee held a total of four, non-publicized closed-to-the-public meetings when considering the candidates. During the meetings, Strand, Roberts Hotels and Bolton each had an opportunity to present their proposal to the committee, according to Planning and Development Director James Benderson.

“The goal was to get a group that everybody was comfortable with to reduce any risk,” Benderson said. “We want to make the St. James the best asset it can possibly be.”

If the council approves Evans’ request, Benderson said the city would begin drafting a contract with the approved management company.

The Times-Journal filed a public information request on Feb. 27 to obtain access to the proposals for the St. James Hotel and asked for a response within 10 days. The request specifically asked for names of the companies that submitted bids, locations of the companies and details for each proposal. The city has yet to respond to the request.

The suitor search for the St. James began at the end of July, when Gourmet Services LLC abandoned the hotel six months into a 5-year contract. After the company’s departure, city officials examined the hotel and found damages caused by a lack of maintenance.

Volunteer general managers Nancy Smith and Patty Sexton, along with a number of other volunteers and a few paid workers, have run the city-owned St. James since Gourmet Services’ departure.