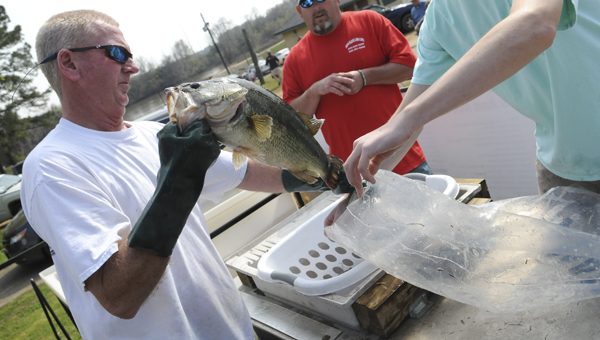 A large fish gets weighed at Saturday’s Selma-Dallas County Sav-A-Life fishing tournament at the Selma Marina. The tournament was won by Kevin and Torrey Jones, who brought in a total weight of 19.65 pounds. The largest fish caught was 5.3 pounds by Corey Cole and Kenny Green.–Josh Bergeron

By Daniel Evans and Josh Bergeron
The Selma Times-Journal

Organizers hoped Saturday’s Selma-Dallas County Sav-A-Life bass fishing tournament would reel in a lot of money to support the local charity and the results did not disappoint.

Sav-A-Life, which supports families with unplanned or crisis pregnancies, was hoping to earn enough money to move into a larger facility and to purchase an ultrasound machine. Jennifer Dobbs, executive director of Selma-Dallas County Sav-A-Life, said  both should be possible after the money raised Saturday.

However, Dobbs didn’t know the amount raised until after the event. Once she caught a glimpse of the $17,915 check, she struggled to hold back tears.

“It just exceeded all of my expectations,” Dobbs said. “Combined with the money we raised previously, we will be able to purchase the ultrasound machine and it will help pay for a new building.”

The center has wanted to move into a larger building because it sees over 200 families a year. The ultrasound machine has been in the works for a while as well, but the center was relying on its annual fund raisers to raise enough money to make it possible.

Dobbs said in a previous interview with the Times-Journal that using an ultrasound machine greatly increases the odds that a woman will choose life over abortion.

Though Sav-A-Life was Saturday’s big winner, Kevin and Torrey Jones couldn’t have been far behind. The duo won $3,000 for winning the overall tournament, with a grand total of 19.65 pounds.

“We started out slow, but by mid morning we got on a streak,” Kevin Jones said. “It seemed like we caught all of them in two hours. I guess the best areas for us were just the shallow spots.”

The winners of the biggest fish contest were Corey Cole and Kenny Green, who caught a 5.3 pound fish.

A total of 134 sponsors helped make this year’s event possible.