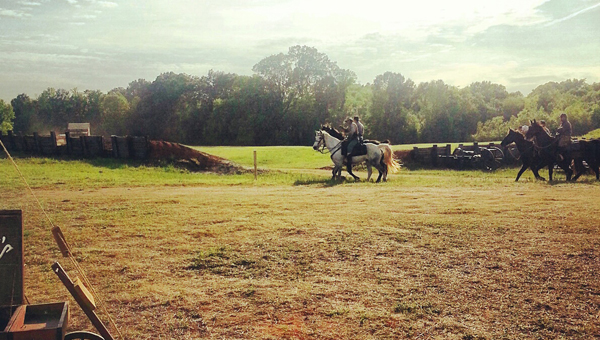 The 19th century is coming back to Selma in April.

Organizers are making preparations for the 149th anniversary of the Battle of Selma — April 24 to 27. Saturday marked the second weekend in a row that organizers spend the day at Riverside Park — just off of Riverview Avenue — making small repairs to buildings, cutting grass and readying the battlefield for reenactment.

To date, 500 people are signed up to take part in the re-enactment. Organizer Jack Burns said the number is encouraging, as several more weeks remain for registration. Last year, Burns said about 700 people took part in the reenactment.

“We’re doing pretty well for it being so early,” he said. “I expect that quite a few will sign up in the last week or so, or even walk up on the day of and register.”

Future preparations include shaping the battlefield and designing surrounding and structures to look like a part of 1865.

North Alabama resident Frank Brower will be among the hundreds of soldiers in the battle. Brower, who has participated in the Battle of Selma since 1980, says he originally became interested in the event because of its historical significance.

“I’ve had a number of different roles as a re-enactor, but most recently I have been doing artillery,” he said. “It’s a game, an approximation of the tactics and equipment that soldiers used at the time, but there are times where it can seem realistic.”

The battle reenactment may be the highlight of, but several more events dot the schedule of the 149th anniversary.

On Thursday and Friday, Burns expects hundreds of students to participate in history tours. The tours will include 1860s style food and clothes. Burns said approximately 1,000 students attended the history tours last year.

Battle preparation begins on Saturday and Sturdivant Hall will have a military ball at 7 p.m.

Sunday is the main event and the Battle of Selma reenactment begins at 2.p.m.

Burns said the entire weekend provides an educational opportunity for all ages.

“I have always been taught that, if we forget our past, we are doomed to repeat it,” he said.