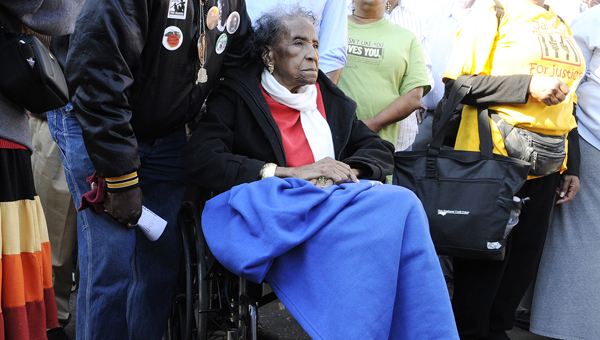 Lapsley Street may be no more, if the Selma City Council votes to rename it after a family that was active in the civil rights movement.

During a council committee meeting on Thursday, councilwoman Bennie Ruth Crenshaw outlined her proposal to completely rename Lapsley Street for the Boynton family. The street runs from the Alabama River to R.B Hudson School. It becomes Summerfield Road at R.B. Hudson.

The idea was first proposed during the early 2000s, but Crenshaw now plans to bring the matter up for a vote. She said the renaming is long overdue.

“Mrs. Boynton and her husband played such an important role in fighting for voting rights and basic human freedoms,” Crenshaw said. “I think the least we could do is name a street after her.”

Amelia Boynton, nicknamed the mother of the voting rights act, welcomed more than 20 congressmen into her home during the civil rights era.

Her son, Bruce Boynton, said the congressmen who stayed in her home drafted the voting rights act and developed the idea to march to Montgomery during their time in Selma. Martin Luther King Jr., James Bevel and other civil rights leaders also stayed in her house during the 1960s.

In the 1960s Boynton was charged and convicted of trespassing for being in a restaurant in a bus terminal, which was “whites only.”

The supreme court’s decision led directly to the Freedom Riders movement, in which mixed racial groups rode public transportation into the south to protest local laws.

Ward 3 Councilman Greg Bjelke said the renaming shouldn’t completely eliminate Lapsley Street, named for a railroad entrepreneur and prominent attorney in Selma’s history. The First Presbyterian Church is built on land given by the Lapsley family.

Bjelke countered Crenshaw’s proposal by asking her to rename a portion of street from J.L. Chestnut Boulevard to Highland Avenue. Bjelke’s proposal would also require a partial renaming of Summerfield Road.

“This is the historic district and it is part of Selma’s history,” he said. “I don’t think we should completely wipe out this guy just become someone else came along. Doing it from J.L. Chestnut to Highland wouldn’t cause a problem with the post office.”

The policy reads “City Council, at its discretion may provide the opportunity for all affected property owners and interested person to speak before the city council at a public hearing.”

Crenshaw said she doesn’t plan to hold a public hearing on the matter because the renaming was proposed before the city’s policy and, as such, is exempt. Crenshaw said the renaming would be brought up for a vote at Tuesday’s regularly scheduled council meeting.

“It will not be a long discussion for me,” she said during Thursday’s committee meeting. “Let’s just take a vote and have the council make a decision.”

SABRA auction a hit once again