Thursday event calls for end to violence in Selma 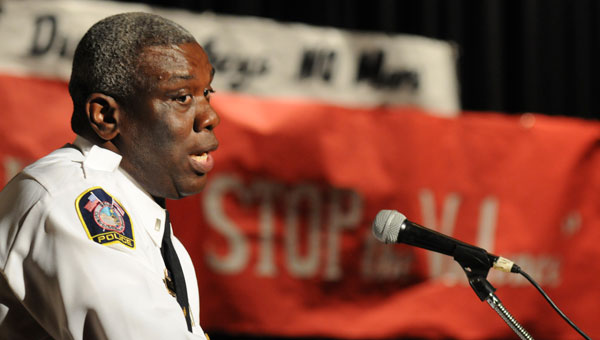 Representatives of the city of Selma, the Selma Police Department, the Brant Center, Gospel Tabernacle Church of God In Christ and the Selma City School system came together Thursday to encourage the youth to prevent violence in their community.

“We did it, not so much as a intervention program, but more so as an educational program,” Crystal Boykin, a Student Council sponsor and career technical teacher at the School of Discovery, said. “We have a wonderful students in this town, and what they need is help making those good choices in their lives.”

The murder of 18-year-old Selma High student Alexis Hunter inspired the school to hold an assembly that would push students in the right directions so similar incidents would not occur.

“After that, I think, it just kind of shook all of us in the community,” Boykin said. “When we got back to school, I wanted to do something that was going to help the students at this young age realize that choices you make early in life can determine your future.”

Each targeted education and obeying teachers and parents as essential actions to avoid and prevent violence.

After every guest speaker finished their presentation, a handful of students on the stage would raise the city’s No More campaign signs and chant, “Not more bullying. No more fighting. No more violence.”

King told the audience of students about the harsh realities of the violence he comes across daily. He mentioned the time he had to pick a teens’ brain off the streets after a murder.

King begged the children to help reduce the violence in the community, which he said starts by straying away from troubling situations.

“I’m tired of doing death notifications,” King said. “I’m tired of going to people’s house at two and three o’clock in the morning and telling them some fool has killed your loved one.”

Pastor John Grayson, pastor of the Gospel Tabernacle Church of God In Christ, concluded speech portion of the ceremony by introducing a list of conflict resolutions, including using words to express feelings instead of fists.