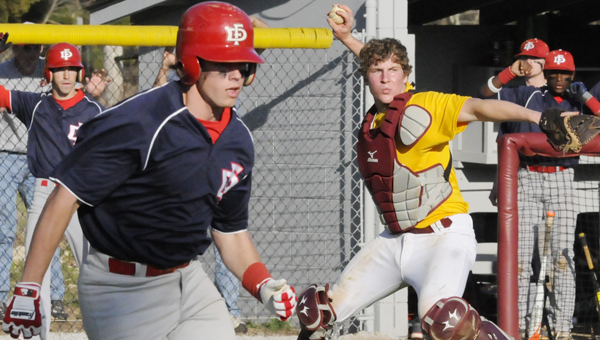 The Morgan Academy Senators (4-9) rallied for a 4-3 win in extra innings over Fort Dale Thursday night for their first area win in two years.

The Senators trailed 3-2 in the bottom of the seventh inning but Jackson Henderson scored on a passed ball to tie the game 3-3. In the ninth inning, the Senators cleared the dugout in celebration as Woodham Keemer singled to score Henderson to give Morgan the win.

“That’s huge. That’s the first area game we’ve got in two years so it’s big for us,” Morgan head coach Jeremy Carter said. “It’s big for our program and for these kids. They deserved it and they’ve worked hard. They didn’t quit and they laid it all on the line to come out with the victory.”

Just minutes before Keemer came up to bat, the Senators tried a squeeze play that failed when Trey Powe was unable to make contact with the ball, which resulted in Adam Seele getting caught in a rundown and being thrown out at third. Powe hit into a fielder’s choice but managed to beat out a poor throw to first that would have resulted in an inning ending double play. Henderson and Powe were on second and third when Keemer came to the plate and the sophomore delivered, singling to score Henderson to win the game.

“Woodham had a clutch hit,” Carter said. “It was in the hole, made a good bounce over there and third base couldn’t handle it.”

Carter said the momentum from this win is something the Senators’ can carry through the rest of the season.

“We can definitely build on this,” Carter said. “It is a motivation booster because that’s a good baseball team. Fort Dale is a great baseball team so to beat them was good for our kids.”

The Senators led 2-0 until the fifth inning. Fort Dale tied it in the fifth and then took a one-run lead in the sixth inning. Alex Davis pitched five innings for the Senators and Powe pitched the final three innings.

Morgan Academy will play in the Monroe Tournament Friday and Saturday. The Senators’ next home game will be Saturday, March 29 against Macon East.