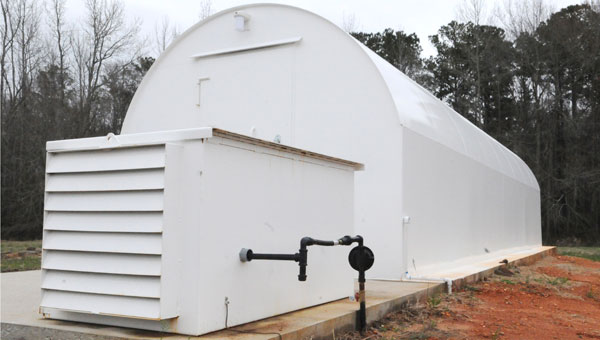 The city of Selma recently started advertising for bids to build a new above-ground storm shelter within the city limits.
The structure above, which is located near Southside High School, is one of three the Dallas County Emergency Management Agency has built in the Dallas County. (Sarah Robinson | Times-Journal)

Selma may soon have another resource that could prove vital during natural disasters.

The city recently began advertising for bids for an above-ground storm shelter that would be located on J.L. Chesnut Boulevard, near Marie Foster Street. The shelter is estimated to cost the city $30,000. An additional $141,000 will be paid for through a Federal Emergency Management grant, according to Mayor George Evans.

Evans said the shelter would be a valuable asset for the city.

“We are certainly doing it to ensure the safety of our city,” Evans said. “It would be there to protect our citizens if a storm should come.”

Evans said the shelter would fit 60 to 70 people comfortably.

The bidding process ends April 7, when a bidder will be selected to build the shelter.

The city originally requested funding for three, significantly larger shelters, according to Evans. After funding only allowed for a single shelter, Evans said the J.l. Chestnut site was chosen for its accessibility.

The new shelter is the latest in a series to be built in Dallas County. After receiving an EMA grant in 2013, county officials built shelters on Dallas County Road 65, on Pecan Road in Plantersville and at Southside High School.

Once all shelters are complete, Abbott said all four would open immediately following a tornado warning, accommodating a small group of people.

She said the shelters are necessary because many of the houses in Dallas County are susceptible to high winds and severe weather.

“In the unincorporated portion of the county, some of the older homes are just not up to par,” Abbott said. “Anybody that doesn’t feel safe, will be able to come to the shelters for a safe place. Once the shelters open, they will remain open during the duration of the tornado warning.”