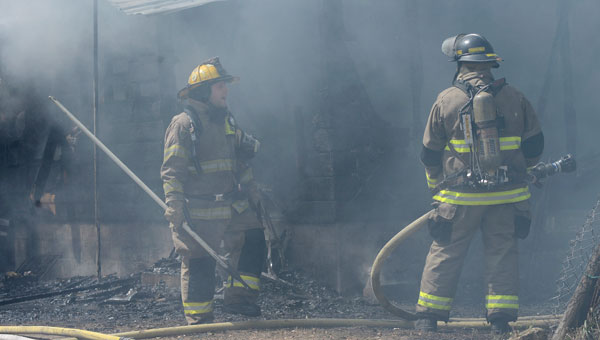 Selmont resident James Brown, 46, lost his home of six months and several personal items in a house fire Wednesday, but he’s grateful that no one was injured.

Brown, who shares a home with another man, recalled the moment he noticed his wooden house located on 710 Johnson Street was on fire. He said he was speaking with his Aunt Gloria Brown less than a mile away before he heard a loud noise, ran to his home and attempted to enter the front door before being overwhelmed with smoke and heat from the fire.

James said the first thought that ran through his mind once he learned of the fire was that his loved one may have been inside of the house.

“I thought my uncle was still in there,” James said. “But once I knew that he wasn’t in there, I just …let it burn. I can’t do anything.”

Selma Fire Department Battalion Chief Joe Phillips confirmed that no one was injured. He said the cause of the Wednesday fire is undetermined.

James Corley, Chief of the Craig Field Volunteer Fire Department, said his department used two trucks to provide 5,000 lbs of water to extinguish the fire after they received a call about at 12:57 p.m.

Around 1:27 p.m., an Alabama Power employee arrived at the scene to cut the power line to the house.

James said he his also lucky to be alive, since he was napping before a combination of phone calls and a visit from his Aunt Gloria woke him up.

Among the many items James’ lost, which include his clothes and cell phone, his cosmetic teeth was his biggest concern.

James’ said he was not worried about finding a place to stay for the time being. Gloria said she feels bad that her nephew lost his home, and she’s hoping American Red Cross will be able to help him through it.

“I was trying to tell him about American Red,” Gloria said. “They can try to do something to help him, too. We can try to go from there, and help him find another place to stay at.”

The east side of a neighboring house was charred by Wednesday’s fire.