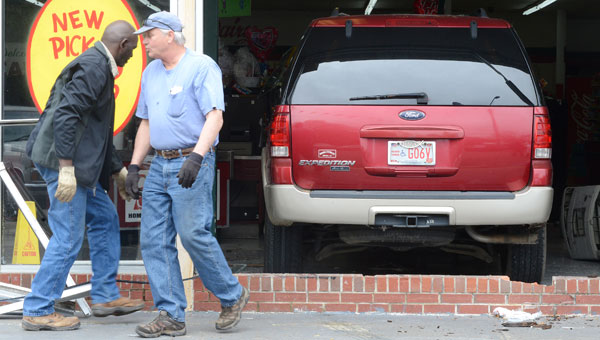 Workers clear glass, metal and other debris from around an SUV that had been driven in to the front of Selma’s Calhoun Foods grocery store on Tuesday afternoon. (Jay Sowers | Times-Journal)

Shoppers and employees who were inside Selma’s Calhoun Foods grocery store at noon Tuesday are breathing a sign of relief after no one was hurt when an SUV slammed through the store’s front window during the busy midday rush.

The driver of the vehicle was 71-year-old George Moore. Moore was also unhurt when his Ford Expedition crashed over an outside bench, through a floor-to-ceiling panel of glass and came to a rest after hitting one of the cash registers.

In a press release, Lt. Curtis Muhannad with the Selma Police Department said an officer’s investigation into the accident found that Moore is a diabetic, but they have not determined what caused him to lose control of his vehicle.

Calhoun employees declined to comment on the situation, but several people who arrived after the accident had occurred voiced relief that no one was hurt.

Yaser Alzerati works nearby and was stunned when he saw the damage to the storefront, as well as the bench that had be located in front of the building.

“There was a bench here where I will sit sometimes,” Alzerati said. “I just can’t believe how lucky everybody was to not be hurt.”

At the scene, Selma Police officer Lt. John Brock said it appeared to be nothing more than a slip of the foot sent the SUV through the storefront.

“It looks like he just hit the gas instead of the break,” Brock said. “He seems to be more embarrassed than anything, but the good thing is that even though there’s a lot of damage, everything can be fixed.”

Brock said Tuesday’s accident was one of the few such incidents he had seen during 28 years with SPD.

“It’s just lucky, you see this stuff on TV all the time. If somebody had been at that register, it would have been bad.

Selma resident Raymond Craig had parked in front of the store and exited his pick-up truck before realizing the store was close and there was an SUV parked inside the business.

“I didn’t notice it until I parked and turned around. I just couldn’t believe it,” Craig said. “I was coming to get my dinner now, but I guess I can’t get it. But it’s just a blessing no body got hit or got hurt.”

File Photo | Times-JournalGot one: Earl Richie poses with his bass fish at the 2013 Sav-A-Life Bass Tournament. With nice... read more