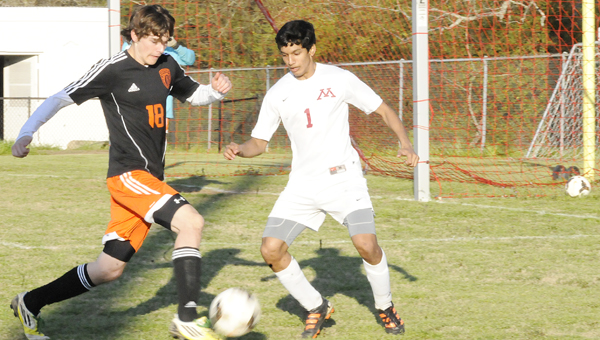 Morgan Academy’s Diyan Patel, above, attempts to steal possession of the ball from a Hooper Academy player in Tuesday night’s game. Morgan Academy’s Harrison Watters, below, races the ball down the field. The Senators won the game 2-0 to advance to the playoffs for the first time.–Daniel Evans

For the first time in school history, Morgan Academy’s boys soccer team is headed to the postseason.

Harrison Watters scored twice to lead the Senators (5-5) past Hooper Academy 2-0 Tuesday night in a key win that locked up a playoff spot for Morgan Academy.

Watters scored in the opening minutes of the game, off an assist from Phillip Goodson and put the game away late by beating two defenders and knocking in a high shot over the Colts’ goaltender.

“This puts us in the playoffs for the first time ever,” Morgan Academy head coach Jay Minter said.

Morgan Academy will be in action Thursday against Fort Dale Academy at 7 p.m. The winner of that game will finish second in the region.

In the first half of Tuesday’s game, Morgan seemed to control possession of the ball, although the Senators couldn’t capitalize on several good looks. The second half was a different story, as Hooper kept possession and rattled shot after shot towards Senators’ goalie Rance Morgan, who kept coming up with save after save.

When the Colts were awarded a penalty kick in the second half, Morgan was forced to defend a high, arcing shot that appeared destined to find the back of the net.

Instead, the goalie leaped into the air and deflected the shot with one hand, before catching it with both, to the cheer of the Senators’ sideline. The stop helped preserve a 1-0 lead.

“Lance Morgan made a huge save on a penalty kick,” Minter said. “If he doesn’t make it, it’s a 1-1 game so that save was huge.”

Morgan Academy’s Lady Senators (5-4) had already wrapped up a playoff spot going into Tuesday’s night’s game against Hooper Academy, but now the Senators are chasing an area title.

The Senators took another step in that direction Tuesday, defeating Hooper Academy 3-1. Brooklyn Whitaker scored in the first half, followed by goals by Lauren Rutherford and Jaycee Sanders in the second half as Morgan rolled to a victory over the Lady Colts.