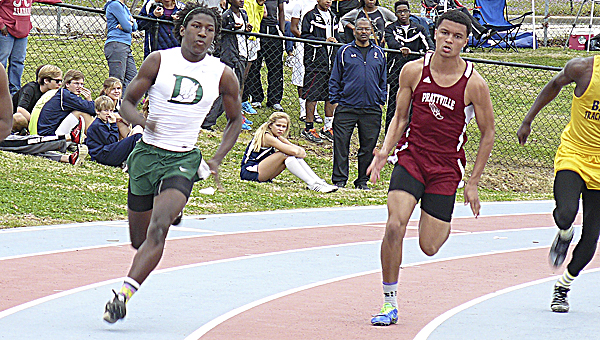 Dallas County’s Brandon Oliver runs in Saturday’s track meet at Montgomery Academy. Oliver and the rest of the Hornets’ boys finished tied for first with Prattville in the team competition, the first track title the school has won since coach Robert Dolbare helped restart the program four years ago.–Submitted Photo

MONTGOMERY — The Dallas County Hornets’ tied for first with Prattville in the boys’ overall team standings at Saturday’s track and field competition at Montgomery Academy.

Dallas County’s boys, who scored a total of 73 points, were led by top-5 finishes from Xavier Knight and Quintavis Parker and a second place showing in the 4 x 100 meter finals.

Dolbare said the win — which was the first in Dolbare’s time as coach — was a total team effort.

“In order to win a team title in our sport you have to have contributions from a wide variety of areas,” Dolbare said. “I thought the best thing we did throughout the day was we compiled points in events and really picked up a lot of very high finishes that added to our point total at the end of the day.”

Dolbare said there is no tiebreaker procedure in track and field, so Prattville and Dallas County were co-champions of the 24 team meet.

“We can not get complacent off of this win,” Dolbare said. “We have bigger team goals that we set before the season that we are trying to achieve and this is one step on the path of us trying to achieve those goals.”

The Hornets’ girls finished 16th in the team standings out of 22 teams.

In a meet last week in Demopolis, the Hornets also shined in their first track meet of the year.

Spradley finished first in the 110-meter hurdles and second in the 300-meter hurdles.  The Hornets next meet will also be at Demopolis High School April 8.