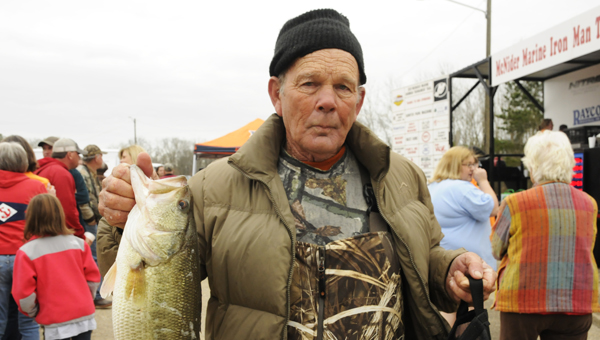 File Photo | Times-Journal
Got one: Earl Richie poses with his bass fish at the 2013 Sav-A-Life Bass Tournament.

With nice weather expected, local fisherman are gearing up to reel in a bucket full of fish while helping a good cause at the 2014 Bass Tournament Fundraiser, which supports Selma-Dallas County Sav-A-Life.

The tournament will take place at the Selma Marina Saturday, March 22 and will help raise money for Sav-A-Life, which supports people that are dealing with an unplanned or crisis pregnancy.

“They need to move to a larger facility than where they are,” tournament director and local business owner Steve Craig said of Sav-A-Life. “Also they are in desperate need of an ultrasound machine. We are hoping these funds will help purchase the ultrasound machine.”

Jennifer Dobbs, the executive director of Selma-Dallas County Sav-A-Life, expressed the importance of adding an ultrasound machine to the center in a recent interview.

“Once a woman sees an ultrasound, she is 90 to 95 percent more likely to choose life,” Dobbs said. “It is a great, amazing tool to be able to use in our center.”

Craig, who also served as director for last year’s tournament, said the 2013 tournament raised around $16,000 dollars. Craig also said that he hopes this year’s event can be as successful.

This year 134 businesses have signed up so far to contribute to the tournament.

Those interested can register at Rountree Outdoors, Selma Curb Market, The Store in Valley Grande, Steve’s Service Center and Brech Marine.  Registration will also take place at 4 a.m. Saturday morning at the Farmer’s Mark at Bloch Park in Selma.

The winner of the tournament will take home $3,000 guaranteed and the top finishes will also win prize money. Craig welcomes spectators to Saturday’s weigh-in, which will start at 3 p.m. Saturday.

And Craig said that he will likely even give out a couple of door prizes to some spectators.

Craig said anyone that loves to fish should donate $100 to Sav-A-Life and come have a fun day of fishing” Saturday.

Anyone that needs information on the tournament can contact Craig at 875-4020.

Molly Nichols, right, laughs while fellow Selma Pilgrimage hostesses pose for a photograph in front of the Vaughan-SmithermanMuseum Saturday during... read more