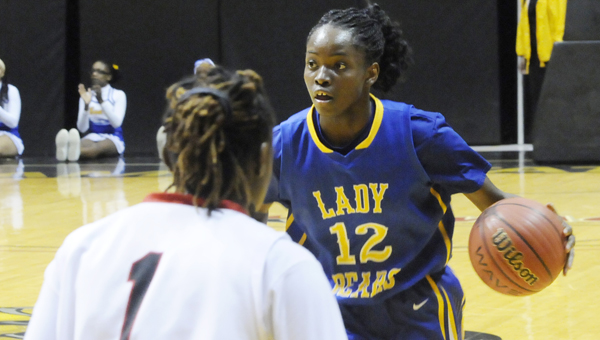 Keith guard Harriet Winchster is the Times-Journal’s 2013-2014 girls player of the year. Winchster averaged 13 points per game, four rebounds and seven assists this season while helping to lead the Bears to the Class 1A Central Regional at Alabama State University. (Daniel Evans | Times Journal)

After a spectacular season where she led Keith to the Class 1A Central Regional, Keith guard Harriet Winchester is the Times-Journal’s girls basketball player of the year.

“It says more about my team,” Winchester said of being named player of the year. “We didn’t make it as far as we made it last year. We are still getting united and playing together as a team even better.”

Winchester isn’t your everyday sophomore, because she’s been playing on the Bears’ varsity since the seventh grade, which gives her the same amount of playing experience as most seniors. This season she averaged 13 points per game, four rebounds and seven assists per game, but although she sometimes make it look easy she said at one point this season she was struggling a little with her game.

“I got better after my coach and I had a talk,” Winchester said. “I went into a slump and it just seemed like I wasn’t good anymore. I went into a depressed mode and he had a talk with me. The night I had a 40-point game [against Autaugaville] that helped me a lot.”

In the game against the Eagles — in the Class 1A, Area 5 championship — Winchster scored 20 of the Bears’ 23 first quarter points, including four three-pointers on her way to her 40-point performance.

“It felt great,” Winchester said of that game. “I was carrying the team on my shoulders. I was on a roll.”

Unfortunately for the Bears, their season ended in the Central Regional semifinal against Loachapoka.

After making the Class 1A championship game and falling to Brantley in 2013, the Bears fell four wins short of a championship this year.

Now, just weeks after watching Dallas County’s boys win the Class 4A state championship, Winchester said she is more motivated than ever to make sure she wins a title before her career ends.

“My goal right now is to win a championship like Dallas County,” Winchester said. “I have to get that accomplishment before I leave.”

Joining Winchester on the girls all-county team is teammate Zykia Pettway, who averaged 16 points per game and 10 rebounds. Winchester said she and Pettway, who is also a sophomore, motivate each other to keep playing.

“When she is in a slump and we can’t get the ball to her, we have a little talk because she will slack on defense,” Winchester said. “If I miss more than three shots and stop shooting, that frustrates her. We push each other.”

The other members of the 2013-2014 Times-Journal all-county team are Southside’s Ki’Onna Likely and Calvondrea Blackmon and Selma’s Areyanna Williams. The Panthers advanced to the sub-regional round of the playoffs before losing at Cottage Hill and Selma lost at home to Paul Bryant in a sub-regional game.

Williams averaged 9.4 points per game and 7.4 rebounds per game for the Saints this season.