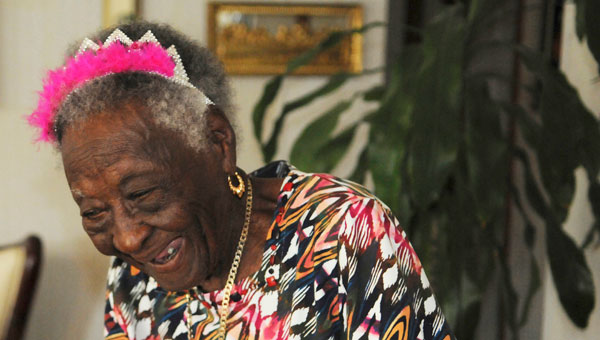 Orrville resident Alice Carter may be 101-years-old, but her lively spirit reflects a woman much younger.

Carter, who celebrated her latest birthday Feb. 18, said it was God’s love and mercy that allowed her to make to 101-years-old with only slight hearing loss and arthritis in knees and hand being her only health issues.

“It makes me realize how good God is,” Carter said.

Carter does not have any surviving immediate family. While some family members have made it to their late 70s and 80s, Carter is the only one to make it to 101-years-old.

Throughout Carter’s lifetime, she has managed a restaurant in Detroit, built planes for World War II troops, served as an educator and more.

She said she is shocked to see many of the changes that the world has developed over the years, such as producing televisions, creating cellular phones and electing an African-American U.S. president.

“It couldn’t happen if it wasn’t in His plan,” Carter said in reference to God.

Carter said she has met many of her life goals. Many of those aspirations included getting the proper education.

She graduated from Dunbar High School in Washington, D.C. at 15-years-old. Ruth Stot, Carter’s goddaughter, has lived with Carter for the last four years.

She said Carter has a great appetite, remains active and usually presents a joyful, comedic character. Stot said Carter does not allow her age to stop her from having fun.

“We just came from Mardi Gras in New Orleans, and she quite enjoyed it,” Stot said. “There are times when living a long life, makes Carter sad.”

“Sometimes she get depressed or whatever, and she says, ‘I don’t know why the Lord let me stay here this long for,” Stot said. “I told her you can’t go before it’s your time, no matter how long he lets you stay here.”

While she has her sad days, Carter said she is overall happy with her life, and she’s glad that God brought her this far.