Trojans struggle to score against Sumter 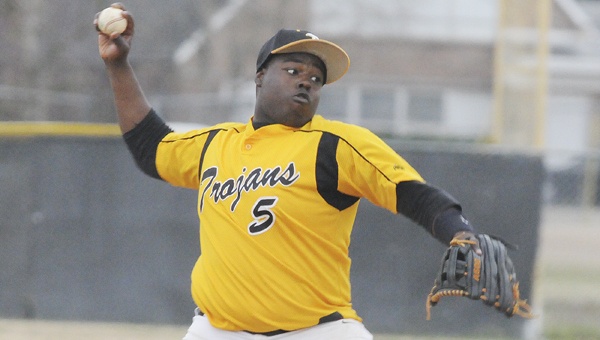 Meadowview Christian’s Carstella Hayes throws a pitch in the second game of the Trojans’ doubleheader with Sumter Academy Friday night. The Trojans lost the first game 6-2 and the second game was stopped due to darkness.–Daniel Evans

Meadowview Christian (2-9) was unable to get anything going at the plate in two games against Sumter Academy Friday night, and to make matters worse the Trojans made several errors in the field that cost them runs.

Meadowview lost 8-3 in the first contest to the Eagles and was behind 4-0 in a second game that was called because of darkness after three innings and does not count as an official game.

“When you give up four hits, you are supposed to win the game,” Scott Gunter said.

In the second contest, Carstella Hayes started at pitcher for the Trojans and got out of a jam in the first inning. Sumter Academy scored one run when Blaine Winsett singled with the bases loaded, but Hayes found his rythym slowed the Eagles down after that.

Hayes forced the next two Sumter Academy batters to strike out, minimizing the damage and keeping the Trojans within one.

But Meadowview was unable to get anything going at the plate. Gunter struck out in the first at-bat of the game, setting the tempo for a poor offensive showing.

The Eagles added another run in the second inning before scoring two more in the third, when a pop fly landed too shallow for Meadowview to field.

The Trojans found some life in the third inning, after Jay Pritchett was hit by a pitch and Gunter singled. Pritchett and Gunner advanced on a fielder’s choice, bringing up Hayes with two outs.

Hayes struck out to end the inning and the game was called as darkness threatened to make visibility difficult.

“We had two practices this week where we worked on fundamentals and they went great and then we get to the game,” Gunter said.