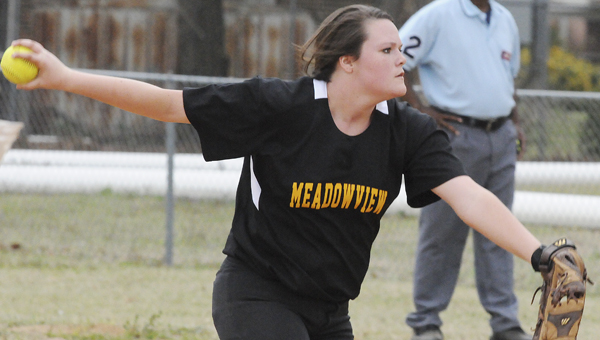 The Meadowview Christian Lady Trojans (6-3) used a great pitching performance from Claudia Kendrick and some timely hits Friday to roll past Sumter Academy 8-3.

Jessie Boswell hit a bases clearing double in the bottom of the fifth, helping the Trojans turn a two-run lead into a 7-2 advantage.

“In the fifth inning, late in the game, you want to piece hits and timing together. Especially late in the game, it puts pressure on them with only two at-bats left to go,” Meadowview Christian head coach Elyse McIntyre said.

McInyre said her team kept their focus Friday, allowing the Lady Trojans to pull away for a region victory over the Lady Eagles.

“I like that we actually stayed in it. We started making more routine plays,” McIntyre said. “We fought enough where our bats could get on the ball and we started plugging away on the hits.”

The Eagles had trouble finding success against Meadowview Christian offensively.

“She is pitching well enough to win any game she wants. She just has to have the defense behind her,” McIntyre said.

The defense was behind Kendrick Friday, slowing down Sumter anytime the Eagles started to get momentum on their side.

Meadowview scored in the bottom of the sixth when Kendrick tried to steal home, allowing Shelby Boswell to score to make the lead 8-3 Trojans.

The bottom of the seventh went relatively smooth for Meadowview.

The first two Lady Eagles popped up, giving Sumter two quick outs. But the Eagles still threatened to mount a charge, getting two runners on second and third before Kendrick forced the final batter to ground out to third to end the contest.

The Trojans play their next home game on April 3 against Jackson Academy at 3:30 p.m.