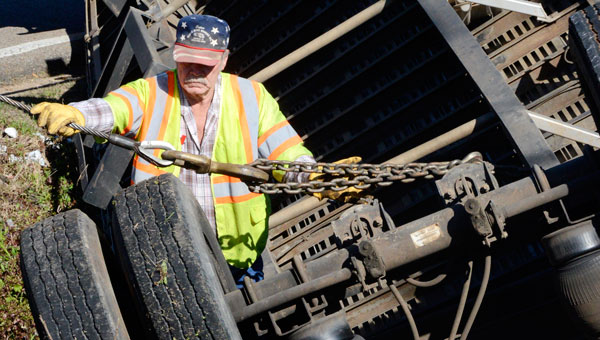 Bruce Carswell attaches a chain from his tow truck to the underside of an overturned tractor trailer Friday morning. (Jay Sowers | Times-Journal)

A truck driver is considering himself a lucky man after walking away unscathed from a single-vehicle accident Friday morning that ended with his truck resting on its top in a ditch west of Selma.

Trey Hagemann, driving a truck leased to Taylor-Made Transportation out of Maplesville, took the wild ride while turning his truck north from Alabama Highway 22 on to Landline Road.

“I have made this turn a hundred times, and the sun was in my mirrors and I couldn’t see my trailer for a second and I corrected back in to my lane because there was a car coming southbound at me,” Hasemann said. “I shouldn’t have done that, I should have just made them move, but I didn’t and I thought I had the turn made.”

Halfway through the turn, the tires on the right side of Hagemann’s trailer caught the lip of the road, and all he could do was watch.

“I could feel the trailer sliding and I looked into the mirror and could finally see the trailer starting to go and the only thing I could do was wait for it to be over with,” Hagemann said.

A passing motorist climbed on top of his truck and opened the driver’s side door while he was unbuckling his seatbelt, which he credits with saving his life.

“I had a spotless record before today; no tickets, no accidents, nothing,” Hagemann said. “It wasn’t a fun thing to be a part of.”

Alabama State Trooper Chris Fails said it looked like a little bad luck was all that sent Hagemann and his truck into the ditch.

“It doesn’t look like speed played any role, but the investigation is certainly ongoing,” Fails said. “Right now, it just appears he just caught the lip of the road.”