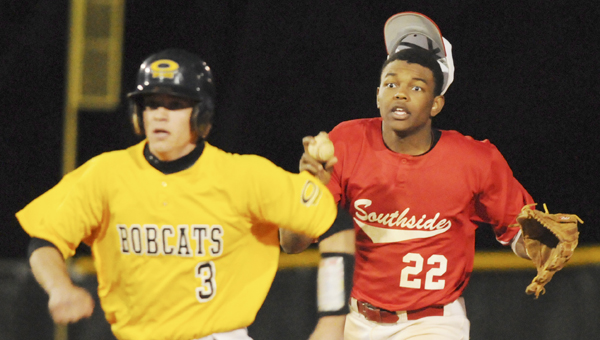 Southside Panthers’ second baseman Khamari Gibbs tries to catch Opp’s Austin Hollinghead as his hat flies off in a rundown during the second game of a doubleheader Saturday night at Bloch Park. Opp won the second game 24-5.–Daniel Evans

Southside’s doubleheader against Opp Thursday at Bloch Park resulted in two lopsided defeats for the Panthers, who are still winless on the season.

Throwing errors, walks and fielding mistakes were too much for Southside to overcome in both games, as the Bobcats rolled to a 15-2 win in the first game and a 24-5 win in the second contest.

“We had a lot of walks and errors. Like I said, we need to work on a lot of this stuff in practice and we will,” Southside head coach John Solomon said.

“This is a very good baseball team so they are going to hit the ball whether you throw strikes or not.”

Opp led the first contest 5-1 after the second inning, but used a 10-run third inning to put the game out of reach.

In the third, Opp’s Jeffrey Hughes singled to score two runs and make the score 9-1 Bobcats. Michael Vidich scored the next run on a ball that got past Panthers’ catcher Christopher Raymond, extending Opp’s lead to nine.

A couple of walks and two fielding mistakes later, the score was 13-1 Opp.

By the time Opp’s Jacob Johnson’s single scored Benjamin Hall for the final run of the inning, the outcome was well in doubt and Opp had a 15-1 advantage.

Southside added one run in the fifth inning before the game was called due to the 10-run mercy rule.

“I can take away the positives,” Solomon said after the first game. “Everybody hit the ball except for a few people.”

Solomon felt that despite the result, his team showed glimpses of their ability to make contact at the plate.

“We hit the ball pretty well at the top of the order, so I can’t complain about that,” Solomon said. “Base errors and miscues, that’s it.”

The second game looked like it would be a tighter contest, especially once the game reached the third inning with the Bobcats only up 3-0. Instead, the onslaught started when Jacob Johnson tripled in the third inning to bring in a run and push the score to 5-0.

In the top of the fourth, the Bobcats kept the momentum going. Justin King tripled to score a run to give Opp a 12-0 lead and William Davis followed with a single of his own.

Davis’ hit took a weird bounce, starting low and then flying over the head of an infielder to result in a two out hit. Moments later, with the score 14-0, Opp’s Walker Messer tripled to clear the bases and give Opp a commanding 17-0 lead.

Southside had some success in the bottom of the third, scoring four runs off of Opp pitcher Jacob Johnson.

Three of the runs were scored as a result of walks with the bases loaded and the final run was scored on a passed ball.

Solomon said Opp is probably the best team the Panthers are going to see during the regular season and the Bobcats continued to show it in the fifth inning, adding seven innings to end any thoughts Southside might have had of a comeback.

The Panthers will take on Ellwood Christian Monday at 4 p.m.