Alabama River Chili Cookoff stirs up fun for all 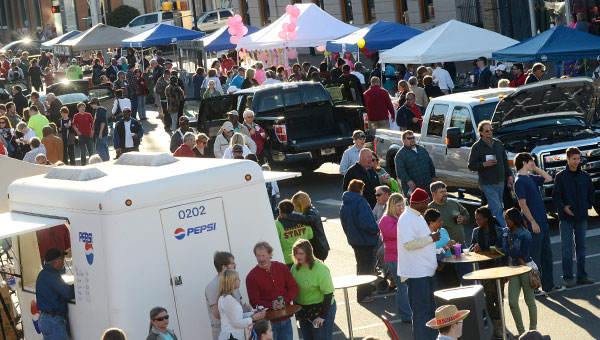 The smell of nearly four dozen chilies wafting through the evening air in downtown Selma had Kim Nosser thinking her white chicken chili might be too different for judges and fans to select it as their favorite Thursday evening during the Alabama River Chili Cookoff.

Nosser, a Surgical Services Coordinator at Vaughan Regional Medical Center, was the lead chef on the hospital’s chili cookoff team that was awarded first place in both the fan vote and the judged competitions of the third annual event.

“When they announced we had won, I don’t even know how to describe it. It was amazing,” Nosser said. “I think it stood out to people and was a favorite for the judges and the fans because it was a white chicken chili with a little southwest flavor that made it stand out to people.”

Nosser’s team was one of 45  the cookoff, and the recipes were as varied as the people who sampled them throughout the evening.

Proceeds from the event will go to support the Cahaba Center for Mental Health, and the center’s Executive Director, Lafon Barlow, said she was humbled when she first learned the center had been selected to benefit from the event.

“When they told us we were the recipients, I couldn’t believe it. That just got me,” Barlow said. “And all of our participants from the center are here, and they are having a wonderful time. I’ve been around sampling the chili and talking to everybody, and I just can’t believe the number of teams they go this year.”

Selma Mayor George Evans also said he was glad to see the numbers of teams and community members on hand to enjoy the evening’s festivities.

“This is the positive side of Selma,” Evans said. “In spite of all the negative drama and this and that, this is Selma. We have a diverse group of people out here celebrate fellowship and friendship. It’s so wonderful to have something like this going on.”